After a pretty elated start to the month, equity markets pulled back sharply in the latter half of October. What had...

...been a 5% gain by around Thanksgiving ultimately turned into a 3% loss for the month.

The about-face certainly hasn’t been because of corporate earnings…those have been great. Can you believe that across the 50% of companies in the S&P 500 which have now reported third quarter results, sales are down only 4% versus the same period last year? What’s more, this result is not simply being driven by the Tech sector; a far higher proportion of companies in cyclical sectors like Industrials and Financials have released Q3 results than have Tech companies at this point.

Earnings are down more than sales of course, given the nature of operational leverage, but even those are only -11% year-over-year. For context, as recently as August consensus estimates on Wall St were for Q3 earnings to be about -25%. We have been pretty optimistic on the prospects for a recovery here at Cushing Wealth, but this catches even us by surprise.

The resiliency is obviously due in large part to: 1) remarkably supportive actions by central banks since March, together with; 2) huge stimulus spending by governments worldwide. The fear that has pressured equity markets recently is that this very effective life support is now being withdrawn at exactly the wrong moment. A “second wave” of COVID clearly seems to have arrived in the Western world, while a reload of US government stimulus has either been paused or killed by this coming week’s elections.

In the face of this fear, there are a few important factors to bear in mind. First, central bank support continues to be unwavering in the US and government stimulus also remains uninterrupted in other major economic regions like the EU. Second, there is currently no second wave in countries that comprise roughly one-third of global GDP, primarily due to successful virus containment in Asia (Chinese GDP is actually now up year-over-year). Third, with the mortality rate of the current wave notably lower so far, lockdowns at this point appear to be very different from those experienced in March.

For example, the “lockdown” announced by Germany this past week will leave most shops, factories and schools open. That is a far cry from the sweeping, global closures in March and April that impacted supply chains of everything from toilet paper to electronics to pick-up trucks. In fact, the inventory restocking required by the severity of those spring closures is continuing to provide a strong tailwind for economic growth (see chart below). Economy-wide lockdowns caused US GDP to drop -31% annualized in Q2; by contrast, RBC CM’s Economics Team estimates that if even if new shutdowns in the US started today and reduced spending in COVID-sensitive sectors like hospitality, leisure and transport back to April levels, Q4 GDP would only drop by -4% annualized. 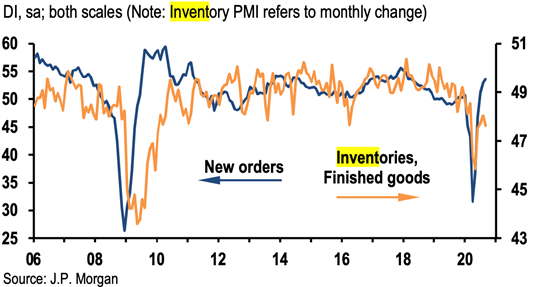 In addition to these quantitative factors mitigating the blow from reduced US stimulus, there is also the potential for positive health news at any time. While Pfizer missed their ambitious October target for releasing initial efficacy data on their vaccine, they now see that as “very likely” to be announced within the coming three weeks. In addition, the spike in COVID cases is perversely helpful for accelerating vaccine trials, which require enough participants to get sick in order to analyze if those doing so mainly received the placebo or the vaccine candidate.

But as always when we talk about the future, we are talking about the unknowable. What we do know is that, historically, equity markets provide their best investment returns during the tail-end of a recession and in the following few quarters. Arguably, we are right in the middle of that period now, and the stock market gains experienced since March don’t automatically mean that there is no room left to run (see chart below). To date, it has been a losing bet to wager against the determination of management teams to thwart the economic pain of this pandemic and of governments to bulldoze through it. Now it is gut-check time for investors – do you think this success was by fluke or by design? 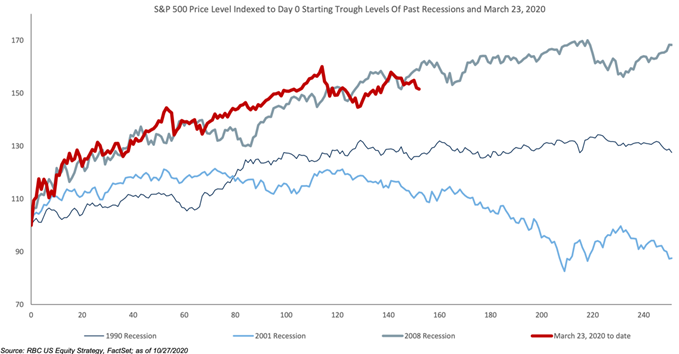 Come what may during this eventful November, we are comfortable with the latter, particularly for the portfolio of specific companies that we own.