...large companies continue to be able to raise fresh money easily, while confidence among both consumers and businesses continues to improve. The rate of economic recovery has slowed – which is natural after bouncing off of such a low base – but it did not reverse despite July’s surge in US infections. Given this context, is it any surprise that equity markets continued to march steadily higher through August?

Of course, financial market prices are a mixture of both real-world numbers and perception. One concern is that the factors above are leading investors’ perception, as reflected in equity valuations, to get so far ahead of fundamentals that they leave no room for error. Which seems odd given…you know…a pandemic. But then, valuations are funny things – it is always ever-so-easy to pass them off as irrationally high given how subjective they are, yet for companies that are able to sustain even just moderate growth rates along with a sound ROI over longer periods of time, valuations are mathematically almost never high enough.

In that vein, it is important to recall that unless you think there is another shoe-to-drop for the economy and that it will not be met with meaningful government stimulus, then as odd as it sounds, we are most likely in the early growth stage of the next economic cycle. Comparisons to the Tech Bubble are completely misguided in this regard. At that time, valuations for the market were very high and being multiplied by peak earnings assumptions; today, valuations are somewhat high but are being multiplied by earnings assumptions that contemplate a historic slowdown. Today’s estimates may still prove to be too optimistic, but they do not provide the environment for a broad-based bubble. In fact, to the contrary, the early growth stages of economic cycles tend to provide very strong investment returns. For example, compare the general similarity of the current stock market recovery to that from the stock market lows of the Financial Crisis: 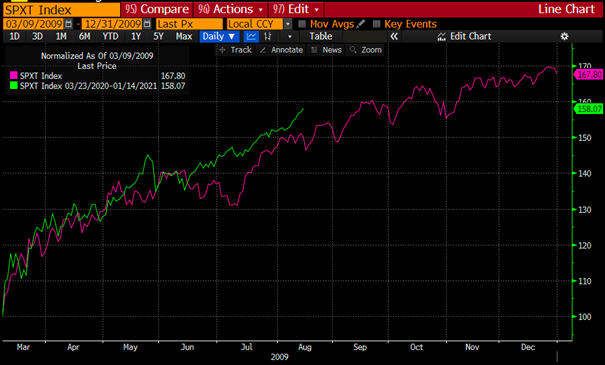 As discussed in past updates, when investors are collectively focused on the risks that are truly most important to investment returns rather than being distracted with short-term noise, a certain “wisdom of crowds” exists that deserves respect. Since April, that focus has clearly existed. The primary risk was a second infection wave closing the economy again later this year, and in a distant second was the risk around US electoral outcomes. Given the sharp focus, it was dangerous to disparage this summer’s market rally.

Arguably that has changed somewhat in August. I’d suggest that the two key factors for financial markets looking ahead are now vaccine timing and the risk of no further US economic stimulus. The former is really just an evolution of the fears about a second infection wave, but updated to reflect the fact that companies like Pfizer say they will have vaccine data submitted for FDA review as early as next month. So, no change to that factor. However, the risk of no further stimulus in the US is effectively new and does not yet seem to have impacted financial markets, instead still being treated a fait accompli.

The extension of US stimulus has gone from an assumed virtual certainty in mid-July to now being quite overdue. I’m no political strategist, but the uncomfortable calculus appears to be that Democrats don’t need to compromise further because they know that they win either way: Republicans either “meet them in the middle” on their $2 trillion stimulus package, or there is no-deal and the economy nose-dives. The latter would presumably tank the Republican’s chances of winning both the Presidential and Senate races, particularly because arguing for the larger stimulus package allows Democrats to claim the moral high ground in the economic upheaval that would ensue.

So, on the one hand we have an apparent early stage economic recovery that should still have room to run; and on the other we have a market that arguably has its eyes closed to a previously ignored risk factor that has become more real. This makes a case for doing some quick-and-dirty scenario analysis. Using vaccine timing and government stimulus as the two key market factors, you might envision a 2x2 scenario analysis matrix as follows: 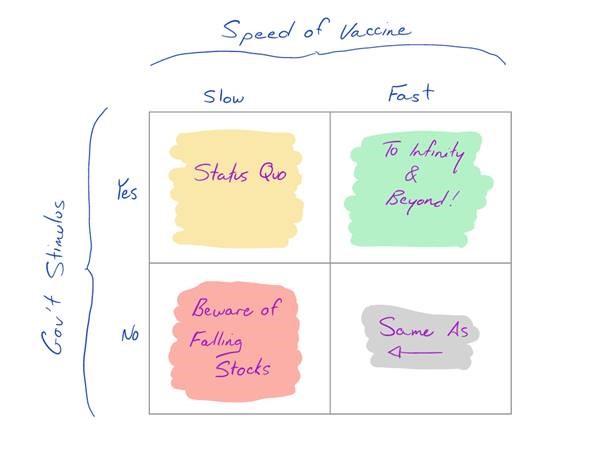 Other factors also exist of course, but the main alternatives are likely to have either a limited time frame of economic impact (i.e. disputed electoral results in November) or are slow moving and possibly even a red herring (i.e. risk of rising inflation).

The two scenarios with no stimulus would seemingly produce the same result in financial markets, at least for a period of time. Stimulus will be a September event since it needs to occur before Congress adjourns at the end of the month, while an approved vaccine would come at earliest after the FDA’s surprise vaccine committee meeting that was just announced for October 22. That leaves three scenarios to explore:

Stimulus approved, slow vaccine progress
Result: status quo. Equities in industries with secular growth themes like e-commerce, cloud and 5G generally continue to grind higher. Job losses accelerate, and although consumers are financially insulated through government stimulus, the lack of ability to spend on travel and other services causes the GDP recovery to plateau. Companies maintain the ability to raise fresh capital easily. Equity markets continue to benefit from positive money flows – some of which is simply government stimulus money being saved – in part due to a lack of a better alternatives.

No stimulus, fast or slow vaccine progress
Result: equity markets drop sharply on the assumption that business confidence will sink, layoffs will accelerate, and consumer spending will contract before any vaccine becomes widely distributed. Secular growth stocks outperform as a safe haven, as do defensive sectors like Healthcare and Staples, and also “quality factor” stocks with high ROICs and low leverage. Cyclicals, banks and consumer discretionary stocks lead the decline. USD strengthens significantly.

While this exercise is of course purely qualitative, it is also rather intuitive. Looking across the three scenarios, equities with secular growth themes appear to have the most attractive average outcome, suggesting a rationale for why their share prices have powered relentlessly higher and will likely continue to do so. Another observation is that the price action across multiple asset classes in late August closely mirrored that of the first scenario, suggesting near-term downside if/when the point about US stimulus being at risk starts to gain traction. The main takeaway, though, is that at the moment we all have a nice window through which to clearly see the main scenarios for equity markets and to adjust our bets accordingly, before election rhetoric and other noise starts to clutter the airwaves of financial markets.