...despite an onset of the deepest economic shock that almost anyone alive today will have ever experienced. This CNBC screenshot has been making the rounds on trading desks this week because it so succinctly captures the dichotomy for investors right now: 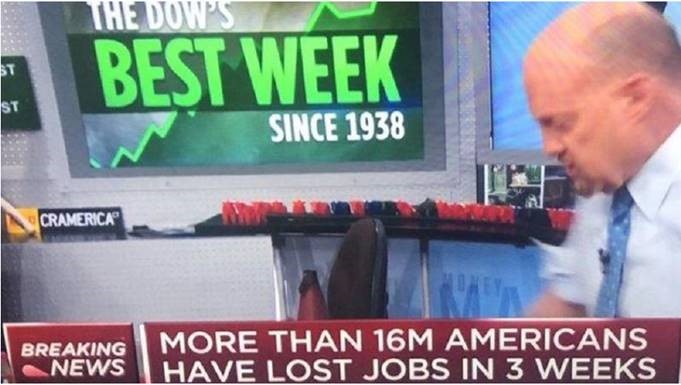 It is certainly an unusual state of affairs…but then investors have witnessed a lot of unusual events over the last two decades that have still netted-out to a positive outcome. So, is the current moment in financial markets an example of the wisdom or the madness of crowds?

There is no doubt about the severity of the economic impact in the short-term. Goldman Sachs, for example, predicts a jaw-dropping 34% contraction in GDP this quarter. Markets are forward-looking though, and the recent price recovery clearly demonstrates that. Effectively 2020 results have been written-off and instead equities are being valued on estimates of “normalized” cash flows for 2021 and beyond, so long as a company appears healthy enough to weather the near-term storm. Given this context, to assess the current rationality of the recent equity market recovery the core question is: how long will this recession be?

Question 1: Health issues aside, does a deep recession by default also mean a long recession?

This was the area where market sentiment first turned more positive in late-March. We have no historical analogue for the depth of this drop aside from the Great Depression – but there are so many differences between this event and that one. The most obvious difference is immediate and massive government stimulus, to both keep markets functioning and encourage end-market demand. On the latter point, RBC’s Chief US Economist Tom Porcelli has recently done some excellent work with high frequency datasets concluding that unemployed hourly workers from the hard-hit service sector will actually earn more on US government benefits between now and August than they would have in their original jobs (table below). This certainly supports the case that deep does not have to also mean long.

Comparison of US worker earnings: Employed versus Unemployed until Jul 31, 2020 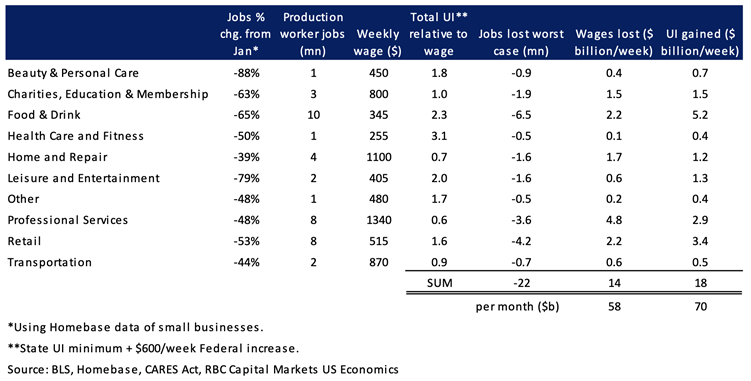 Another unique aspect of the current is that credit is not tight. While banks normally restrain lending reflecting fear of not knowing which borrowers might have problems, this time banks are practically boasting about their liquidity and new loan growth as they take up the mantle of a socially-imposed, moral obligation to support borrowers.

In addition to these factors, early evidence from China’s indicates that deep does not have to mean long as retail sales volumes having rebounded sharply back to 90% of their December levels. 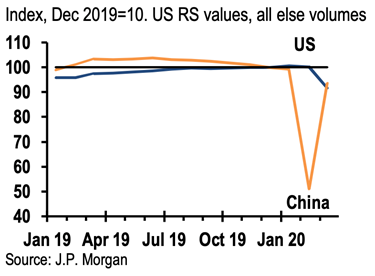 Question 2: Do we continue our current, economically damaging form of social distancing for a long time?

The equity market rally to-date in April has arguably resulted from increasingly positive investor expectations for the answer to this question. Originally catalyzed by the infection curve plateauing in most Western nations, optimism has now extended because widespread immunity testing is about to pick-up steam. Abbott is shipping 4 million tests in 14 days starting now, for example, and Mount Sinai NYC has received FDA approval for a “no-kit” test that other labs might leverage. Combined with the fact that 75% of US hospitalizations have been for people over 50 years old, and that 90% of patients hospitalized had an existing condition like high blood pressure or obesity (Source: CDC report), it is fairly easy to paint a picture where healthy people under 50 are allowed to resume normal life following basic health standards including face-coverings, while those over 50 years old are prioritized for immunity testing. Add in the potential for Gilead’s remdesivir drug to be confirmed as a helpful therapy in the coming two weeks, and investor optimism seems not-so-surprising, especially as government officials have begun to publicly discuss re-opening timelines.

The first phase of re-opening will still be damaging, especially for retail stores, restaurants, malls and travel. Investors are making an effort to handicap that of course, resulting in the outperformance of some sectors over others. Interestingly, people’s intent to quickly re-engage with the world seems high enough to provide a survival level of economic activity if government rules are partially loosened in the near future (chart below).

Intent of individuals to re-engage: The Harris Poll (April 11-13) 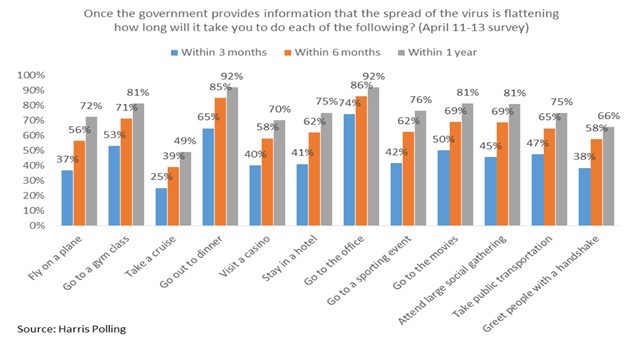 Question 3: Will a second wave of infection cause us to resume severe social-distancing?

This remains an open question. It does not seem contentious that infections will increase when the first phase of reopening begins, an issue that financial markets may have some difficulty digesting. But the goal of distancing has always been to ensure the load on hospitals is manageable, so to the extent that cases rise but are not severe, it would presumably be a positive as society would be progressing toward “herd immunity”. If hospitalization rates jumped however, the renewal of strict distancing would by definition cause the deep recession to also become a long one, triggering a wholesale revaluation of financial markets. The odds of this outcome may not be high given that most governments appear to be exercising an abundance of caution, but it is not 0% either.

So...where does all of that leave us? Using a Bayesian approach, it seems very appropriate that investors’ priors have adjusted positively on the first two of the three questions above, and that therefore market prices have adjusted. But does a 15% discount from all-time highs on the S&P 500 properly handicap the potential outcomes? Using very simple math, if earnings normalize in 2021 at a level 10% below that of 2019, it would equate to around $150 of earnings for S&P 500 companies in aggregate. A stabilized economy with 0% interest rates could arguably trade at a 19x P/E multiple meaning a price level of 2,850 for the index – which is exactly where we are trading today. Perhaps today’s prices are fair-ish based on the likely outcomes for Questions 1 and 2, but they don’t seem to compensate much for the tail-risk of Question 3. There appears to be a healthy dose of wisdom in the price, but also still a hint of madness.