...the ability to rationalize in fairly real-time the underlying factors that have driven recent pricing extremes. This is very valuable, both for coming to terms with what has happened to-date and also for defining the most likely investment risks as we move forward into spring.

Earlier in March, market volatility triggered certain investment strategies to contribute to a partial feedback loop, where lower equity prices catalyzed further selling in order to reduce risk (discussed in the previous update). Ironically, the Fed’s subsequent response to a slowing economy by aggressively cutting interest rates two Sundays ago caused that equity market correction to escalate into a short-term liquidity crunch across all assets.

In an effort to chip out incremental profits in a low interest rate environment, institutional investors and bank treasury departments sometimes engage in very large “carry trades”. These generally benefit from a small mismatch in pricing between two investments where the risk can mostly be hedged away; for example, buying US Treasury bonds and then selling an offsetting amount of US Treasury bond futures for a slight premium. Carry trades are generally low risk so leverage is used to amplify the returns, sometimes on the order of 30:1 or 40:1. These trades are not entirely risk-free however, and the small but unlikely Achilles Heel for some is requiring a stable cost of borrowing…something which the Fed’s enormous, weekend rate cut on March 15 disrupted.

Despite the medium-term benefits of the rate cut, the immediate market response to it was a scramble to unwind large carry trades. US Treasury Bonds were aggressively sold as a result, causing their prices to drop at a time when historically they have done the exact opposite given their status as the world’s ultra-safe asset. That caused a breakdown in asset correlations, which along with a general fear of city lockdowns created an ensuing “get liquidity wherever you can” mentality. This in turn created further selling of government bonds for a number of days, along with the selling of other traditional safe harbours like gold and investment grade bonds; and of course, equity markets hit new lows amidst all of the uncertainty. 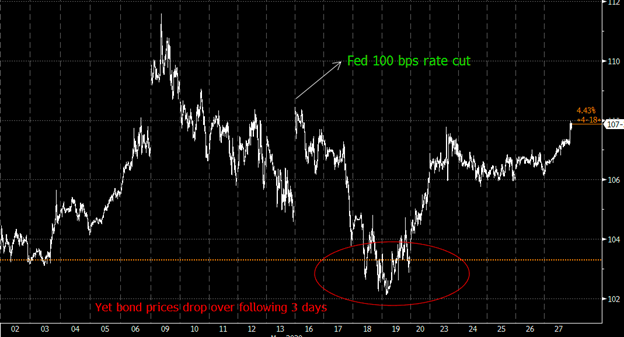 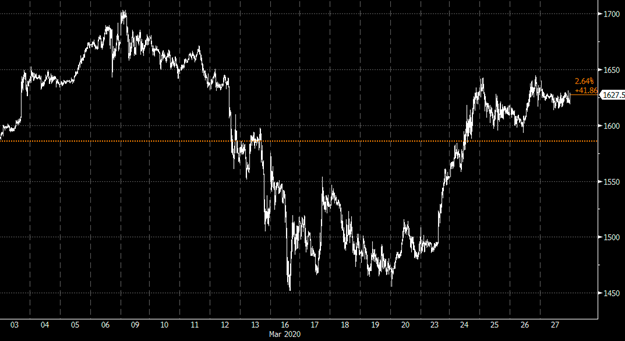 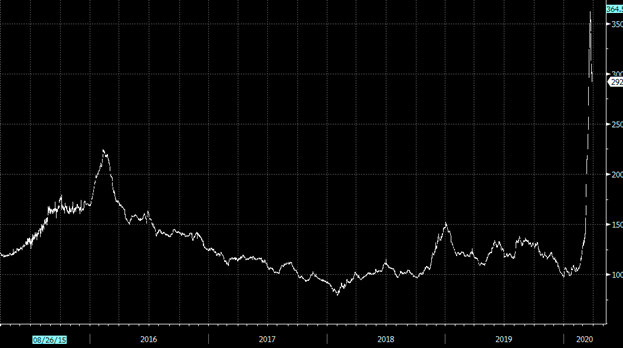 To its credit, the Fed has taken a series of steps with unprecedented speed to address these and other issues almost as quickly as they have arisen: buying commercial paper to ensure that money markets continue to function; buying government debt to alleviate the carry trade unwind; taking the unprecedented step of buying corporate bonds and even corporate bond ETFs to ensure that credit markets remain liquid. The Fed’s desired results have already been achieved in the US Treasury market and are beginning to emerge in the investment grade bond market (again, see charts above). Together with government stimulus, this has also stabilized both high-yield debt and equity markets for the time being.

Looking ahead, the benefits of these remarkably proactive steps are difficult to overstate. Aside from the time lag of a few painful days, the result has been an economic system that continues to function adequately in the face of an unprecedented shock. During the Financial Crisis in 2008 and the fraud fall-out from the Tech Bubble in 2001 (Enron, etc.), identifying risks in the financial system felt like a game of whack-a-mole: you never knew where an unknown risk might come from next, so how could an investor rationally do anything other than watch and wait? By contrast, this time we have walked into a severe recession with a well-capitalized banking system and with a central bank willing to do whatever-it-takes immediately to keep the markets functioning properly.

The implication for investors is that despite the underlying pandemic causing this market sell-off, oddly this time we don’t need to fear for financial survival – we just need to weather the storm. That isn’t to diminish the size of the storm which by all accounts looks to be Category 5; or perhaps Category 4 with the help of government stimulus which is big but has a timing mismatch. Instead, the point is simply to highlight that when this storm eventually passes, our current financial infrastructure will still exist, allowing for the damage to begin to be repaired and for new growth to emerge.

On that note, while I am obviously not an epidemiologist, infection data (the storm) seems to be showing a clear deceleration in growth. There are new cases every day and that could lead to some terrible individual consequences and frightening headlines, but the flat-lining in growth of new cases seems quite apparent and is presumably a positive for society as a whole. Note the change in trajectory over recent days in the following charts:

From an equity market perspective, with the liquidity crunch fading in the rear-view mirror we should see volatility start to moderately diminish. Attention will likely start to turn to Q1 earnings, which begin in a few weeks and are bound to lead to sticker-shock. Economic data for March – US unemployment numbers this Friday – will also start trickling in and will no doubt be historic, although arguably this is no longer news. Companies whose share prices have held in well through the sell-off like Costco and Walmart seem somewhat at risk if they indicate that the recent surge in sales will lead to reduced demand in Q2. However, companies whose shares are down more in-line with the market but show good balance sheet resilience – an ability to weather the storm – seem poised to perform well, at least on a relative basis.