If you were strictly looking at financial data, the latter half of January was very constructive for markets. About 50% of US companies reported...

...Q4 results, with the summary being earnings on-track for +4% growth in the quarter…a major change from the contraction seen earlier in 2019. At the same time, economic measures like PMIs and business confidence almost universally showed an upturn after having finally plateaued in late 2019.

But of course, markets don’t simply reflect data. They instead reflect a blend of both data and perception, and the latter is being dented by the most challenging kind of risk for financial markets: an unquantifiable one.

Acknowledging that the most important impact of the novel coronavirus (nCoV) is human, the financial impact is also going to be real. The schools and factories of 12 Chinese provinces accounting for 62% of the country’s GDP are closed until Feb 9 at earliest. This is likely to shave at least 1.5% from Chinese GDP growth in Q1. However, a transitory economic shock in China will not automatically cause a spillover to global GDP growth:

• China’s economy remains rather insular – US exports to China, for example, account for only 1% of US GDP;

• Inventories remain generally high from the 2019 economic slowdown, creating a perverse positive economic impact so long as the shutdowns remain only temporary; and,

• Global oil prices have fallen rapidly – those have a prompt and direct correlation to higher consumer spending which remains the core driver of the global economic expansion.

In the immediate term there are individual companies or sub-sectors that are clearly being affected including airlines, energy producers and companies that provide discretionary purchases in China (ex. Starbucks, Apple). But the key concern for financial markets overall should be whether the virus eventually dents US consumer confidence and therefore spending. So far, that is a good news story given the very low number of cases reported in the US and an early risk profile that appears to be more moderate than SARS (chart below). 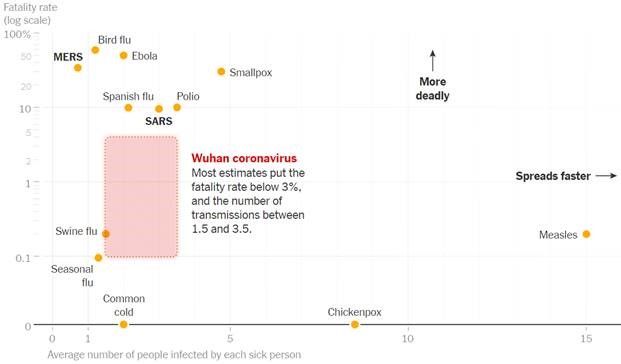 A final aspect to consider is that this is the first potentially global contagion that has occurred in a world with pervasive mobile connectivity. Tracking of new cases hourly was simply not possible with SARS in 2002 as it is now, nor was the sense of immediate fear corresponding to that. As reported cases of nCoV increase over the coming days, it will be healthy to recall the context that that SARS caused 774 deaths globally, but the common flu causes around 50,000 deaths per year in the US alone. After a double-digit run in the S&P 500 since September, stock markets are susceptible to a dose of fear and arguably overdue for a modest correction. As that potentially unfolds, I’d suggest that the main item to watch is how this health situation evolves in the US.