Be Careful What You Wish For

Be careful what you wish for because you just might get it, as the saying goes. The last quarter of 2019 chased away recession fears...

...with trade relations between the US and China finally thawing, resulting in a rejuvenation of business and investor confidence. That shift will culminate this week with the formal signing of the Phase 1 trade deal. The somewhat breathless 11% rally in the S&P 500 that occurred over the same period leads investors to an interesting point though, where the natural inclination is to feel more confident about business fundamentals but less confident about market valuations. 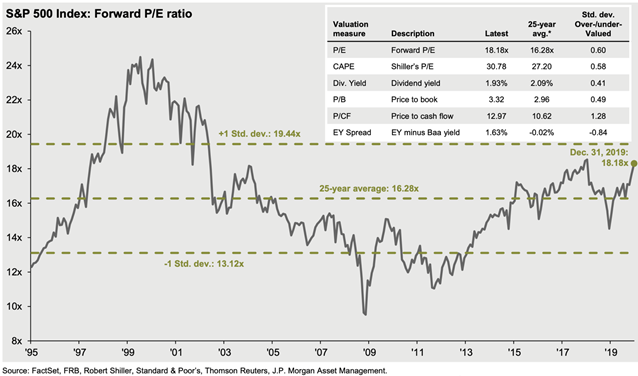 Yet while valuations are above average, they are also not unreasonably stretched, currently at a level less than one standard deviation above their 25-year average. The potential also exists for the denominator (earnings) to positively surprise. While the current the consensus estimate of about 10% earnings growth for this year sounds lofty after 2019’s near contraction, the fact is that earnings growth over the past twenty years has been at a rate of mid-teens or higher more than half of the time. Said differently, when earnings do in fact grow, they tend to do so quite sharply.

It is with this in mind that I’d argue the most interesting thing to occur in equity market during the first week or so of 2020 has in fact been what has not occurred. First, after institutional money managers rushed to buy stocks and reduce cash through Q4, the anticipated New Year’s hangover for stock market prices has not materialized. Second, large scale asset-class rebalancing by pensions funds due to robust 2019 equity returns has not weighed on markets as was feared. Lastly, even surprising and provocative US actions against Iran – an easy potential negative catalyst – was met with a shrug by investors and a modest rally for the S&P.

I’d suggest that the two messages from this market action are:

1. After enduring the crucible of trade wars for the past two years, business and investor confidence has come out the other side and it is not just positive but it is also sticky; and,

This implies that while valuations may be above average, they will not necessarily be an impediment to on-going investment returns over the coming weeks or months. Using a somewhat longer-term perspective, current valuations are by definition going to be somewhat of a limiter on the magnitude of gains for equities though, except for those companies and sectors where healthy growth and a high shareholder yield is evident (as highlighted in the prior update). On that note, Q4 earnings reporting starts in the coming days, which for most companies will also be coupled with their initial expectations for growth in 2020 – we’ll see if investors continue to get what they have been wishing for, particularly on the latter.