Buy the Rumour, Sell the News

So goes the old trading floor saying, and the news this past week was obviously very big…

…The three main risks plaguing financial markets since the sell-off 15 months ago – namely rising interest rates, US trade protectionism, and Brexit in a somewhat distant third – were all put to rest from a high level perspective as of last week.

True to form, equity markets have bought-the-rumour with a 10% rally in the S&P quarter-to-date, the majority of which was concentrated back in October. While they didn’t quite sell-the-news, by contrast the actual announcements last week of a formal US-China Phase 1 trade deal and a UK Conservative majority led to an uninspiring gain of only 1%.

And yet, understandably so. The UK election in fact marks the end of “the easy part” of Brexit. After Britain formally leaves the EU on Jan 31, it will have 12-months to negotiate a free(ish) trade deal. Something of this magnitude typically takes years; for example, NAFTA / CUSMA negotiations began in May 2017 and the deal is still not fully ratified despite involving only three counties and starting from an existing blueprint. In spite the unrealistically short deadline, Boris Johnson has not surprisingly made clear his determination to let Jan 2021 arrive with No Deal rather than extend negotiations with the EU.

At the same time, while US-Chinese relations appear on the surface to be thawing, the Phase 1 agreement seems like a truce-of-convenience between two governments that have other short-term priorities. What happens, though, if in mid-2020 it becomes clear that President Trump is very likely to win a second term during which he no longer needs to worry about being re-elected? How aggressive of an approach might financial markets assume that the White House will then take in Phase 2 negotiations with China, not to mention other trading partners like the EU?

Investor perception of these two risks re-emerging through 2020 seems unlikely – in my opinion – to permit a further expansion of the P/E multiple for a US equity market where valuation is already above average. That implies two things: 1) that equity price performance this coming year is going to be driven by earnings growth rather than multiple expansion; and, 2) that equity markets are likely to be relatively flat and have more whipsaws than normal through 2020. This latter point seems particularly likely given the high prevalence of quant trading strategies and also with passive funds now being officially larger than active funds in the US.

In such an environment, a classic response is to tilt equity portfolios towards a Value style – after all, not only does it intuitively feel defensive to buy stocks with low valuations, but Value has also underperformed Growth by well over 200% during the past decade (see chart below). A differential of that size was last seen during the Tech Bubble, and most of us remember how that ended. European equities have a similar, lower valuation appeal along with theoretically more leverage to a global economic recovery. But historically, Value as a factor has only worked well at peaks and troughs in market valuations (as opposed to slightly above average levels today), or alternatively in times when GDP growth rapidly decelerates to the 0% - 2% range (i.e. exactly what has already occurred, not something that is about to occur). Anecdotally, it is also disconcerting to see both Value stock and Europe favoured in so many of the “2020 Outlook” institutional research reports that we have recently reviewed. If nothing else, buying Value stocks and investing in Europe is not a contrarian view at the moment. 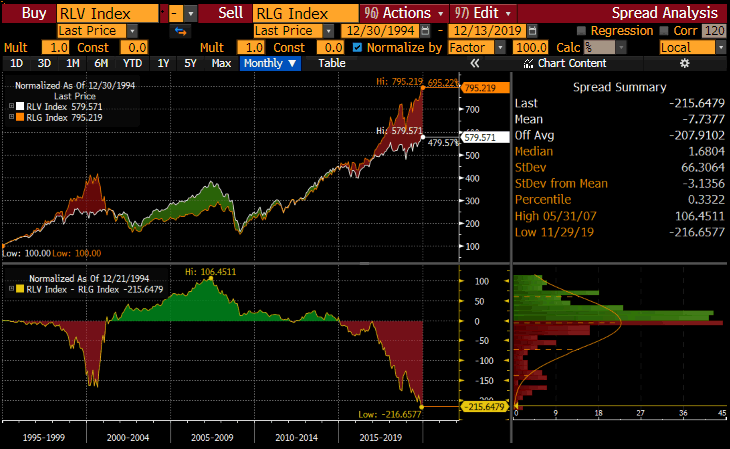 Instead, to us 2020 appears to be set-up as a classic stock-picker’s market, where individual company earnings growth will drive returns rather than any market-wide or factor-based rally. Value stocks generally don’t exhibit strong earnings growth – that is, cheap stocks are usually cheap for a reason – while on the opposite end of the spectrum high P/E companies seem vulnerable in a market that is likely to frequently whipsaw. That leaves us favouring companies where valuations seem fair rather than cheap, where a clear growth opportunity also exists, and more than usual where a high shareholder yield is present (= dividend + buyback). Sectors that most frequently tend to exhibit these characteristics are Technology, Health Care, Financials and Energy…and not surprisingly, these sectors currently have high weightings in all of the portfolios that we manage.