In the empty space that follows a deluge of new information, the behaviour of financial markets can often be quite telling....

...With the noise of daily headlines out of the way, you can get a fairly unadulterated view of the underlying sentiment and money flows that are driving asset prices. Such has been the market environment over the past two weeks: quarterly earnings reports have wrapped up, the Fed appears to have completed its round of “mid-cycle” cuts, and the White House has been uncommonly quiet as it finalizes a Phase 1 trade deal with China.

In this empty space, a fairly clear-cut march higher in equities has emerged, with both the S&P and now even the TSX touching new highs on an almost daily basis. Global interest rates have also continued to revert from their late-summer lows, albeit in a somewhat more sporadic fashion. In fact, the US yield curve has now quietly returned a healthy, upward slope after the much-feared inversion only a few months ago.

Looking ahead, it is difficult to see any obvious obstacles to halt the positive market momentum; there is little consequential news flow until the New Year, aside from the likely-but-not-yet-certain US-China trade deal. Results from Black Friday shopping later this month will certainly be a focal point, given the importance of the US consumer to global economic resilience so far this year. If the result from China’s Singles Day this past week is any indicator though, Black Friday is setting up to be a positive event: Alibaba reported 26% growth for the event this year, with US$38B of sales through its channels in that 24-hour period (fun context: online sales for all  US retailers combined on Cyber Monday last year was only US$8B).

Some sub-themes in certain stocks or sectors are likely to play-out between now and year-end, such as tax loss selling and perhaps a continuation of the Value factor outperforming Growth. But fund managers in general remain meaningfully overweight cash (see first bar of chart below), waiting on a market correction that may not be coming – as one colleague recently described it, “the whole financial world is bearish, but it just doesn’t seem to be working out”. With year-end approaching and equity markets drifting higher in a vacuum of news flow, it is increasingly plausible that we see FOMO among institutional portfolio managers spark a mini-surge in equity markets through the rest of 2019. That’s certainly not the type of rally to chase given that valuations are already above average, but it would provide some good trading opportunities. 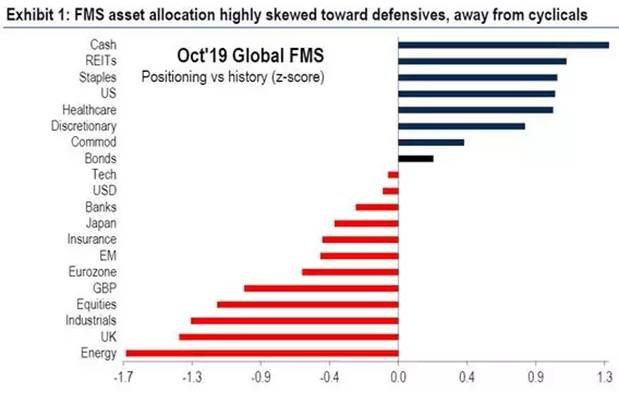