US equity markets have stalled out after hitting a plateau in late February...

...The S&P dropped 1.5% with cyclical sectors leading the decline, and more notably with the index falling every single day of this past week. From a portfolio perspective however, this decline was offset by: a) the USD strengthening against CAD and most other currencies; and, b) Canadian equity markets ignoring the US lead for once to remain unchanged over the period.

As discussed in recent updates, the stall is not surprising. A major catalyst with trade is unlikely until at least the end of March, and the next earnings season is over a month away. Meanwhile the 10% YTD rally has returned valuations to their 5-year average level 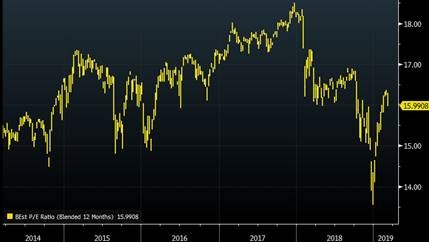 Yet at the same time valuations also remain at their lowest level of the Trump-era. Arguably a case for a renewed Goldilocks environment is starting to coalesce: average valuations, clear signaling from the Fed and ECB that rates hikes are on pause indefinitely, global trade issues apparently receding (Trump-Xi signing event speculated for Mar 27...although you never know), and global employment showing resilience. While equity markets will continue to stall until a US-China trade resolution more certain, it is important to observe that they appear to be increasingly spring-loaded for the balance of 2019 if/when trade resolution occurs.