What an uncomfortable period we are in for global financial markets. First, a variety of small and idiosyncratic events loom with the threat of ballooning into something bigger...

“The only thing we have to fear is fear itself” - FDR

What an uncomfortable period we are in for global financial markets. First, a variety of small and idiosyncratic events loom with the threat of ballooning into something bigger: Hong Kong’s protests, Argentina’s electoral surprise (stock market dropped 50% in one day!), naval incidents along Iran’s coast, etc. Second, these are present in the shadow of much larger and potentially systemic factors: further US tariffs announced on Chinese goods, renewed US-dollar strength and as of this week an almost fully inverted yield curve.

The fear is that some combination of the above will cause a coming recession, yet these issues are not prescriptive of a recession on their own. We do not have a global supply shock (ex. oil in 1979 & 1990), highly restrictive real-interest rates (1981 & 1990) or a clear asset price bubble (2000 & 2008) in the current environment. Instead, we have an understandable fear by investors that altered global trade terms and falling business confidence are going to end a historically long economic expansion. In other words: fear of fear itself.

As a result, aside from some slowing in Europe there is not presently a significant body of data proving anything is truly wrong with the global economy, particularly with much of the banking system so well capitalized. But from an investor’s perspective over the short-term, fear is a powerful force for publicly traded asset prices. So fundamentals aside, it is important to review how those fears may unfold in the coming months.

The yield curve inversion is now of particular importance. Recall that it has had an almost flawless track-record of predicting recessions during the past 50 years, which themselves have a high correlation to triggering a bear market in equities (defined as a decline of at least 20% from the peak price). We explored this when the curve first partly-inverted in March of this year. From the March 24th update:

“… Inversion has famously preceded every US recession, so perhaps not surprisingly equity markets dropped a quick 2% on Friday. The somewhat deeper context of inversion is that: a) it actually tends to be followed by positive equity market returns unless a major asset-bubble has been burst…; and, b) inversion of almost all points on the curve is what really leads to negative outcomes, which is not the case currently. That second point is another way of saying that the reason for inversion matters –the current situation where dovish central bank guidance has ironically been the trigger is rare…” 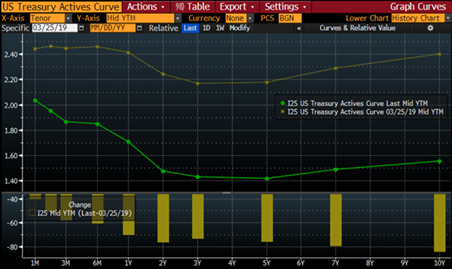 That latter point has evolved. Unlike in March, almost all points on the curve are indeed now inverted, and the bell-weather 2yr-10yr is within 8 basis points of doing so. The reason for the inversion is no longer a change in guidance from the Fed (which mostly lowered the front-end) but rather the fear of a recession (which has lowered all tenors but disproportionately the long-end).

So one very important signal is now signaling something between aggressive yellow light and a pale red light. Meanwhile, the other concerns mentioned earlier add uncertainty during arguably the most important part of the year for businesses: the back-to-school and Christmas selling seasons, along with budget planning for the coming year. Further, this is happening right in front the historically volatile September / October period for equity markets. Finally – and perhaps most importantly from an equity investing perspective – the above factors are occurring while equities remain at above average valuations and within a few percent of their all-time-highs. The S&P 500 is down only 4% from its peak in late July; the TSX is down less than 3%.

As investors, we have to both assess facts and handicap odds. In the last market update, we referenced the Bayesian approach that we favour for the latter in which one continually adjusts their “Prior” as they absorb new data. We described at that time that incoming data was forcing us to start revising our Prior more positively from a very bearish bias. Days later, the new US tariffs were announced which in-turn has caused the further inverted yield curve. Those are both meaningfully negative events, so revising based on those takes us right back to a very bearish bias. Fear of fear itself among investors is making us increasingly cautious heading into September