The main event from these past two weeks is the rapid, 10% drop in equity markets. The recovery proved to be equally rapid, with almost all of the losses now erased. The key takeaway was...

The main event from these past two weeks is the rapid, 10% drop in equity markets. The recovery proved to be equally rapid, with almost all of the losses now erased. The key takeaway was that sharp sell-offs are natural, occasional outcomes in markets where systematic trading models operate among significant passive investment. A near-term implication that I see is investors now being more willing to interpret drawdowns as noise rather than signal, fueling the upward acceleration for equity markets that we witnessed earlier in January.

Also during the period, the US quarterly earnings season quietly drew to a remarkably successful conclusion. Calendar Q4 earnings were 8% above Street expectations on average; more importantly, guidance for 2018 was further increased, resulting in the forward P/E multiple of the S&P 500 dropping by a full point (see chart below; note that P/E multiple is based on prices prior to the sell-off).

Also somewhat lost in the noise of the past two weeks were monthly data reports showing a modest drop in consumer spending, most notably in the US. In healthy growth environments, inflation represents the transfer of pricing power from consumers to business due to demand. Occasional declines in real consumer spending are therefore normal, and are not a cause for concern. You may recall that we saw and discussed this exact same dynamic in the Spring of 2017, with obviously positive ultimate implications for equity prices. 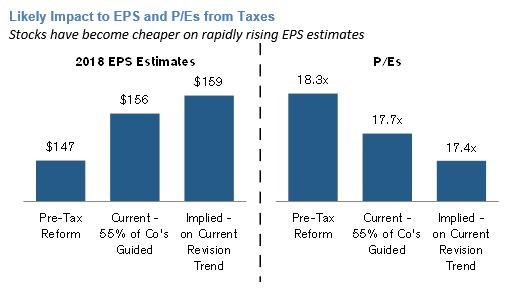 Not a normal piece but went to everyone, so why not post? February 8, 2018 – quick thoughts RE: sell-off

With the S&P 500 down 10%, I thought you might appreciate some thoughts:

As a side note: many European companies pay a single, lump-sum dividend annually in March, which is just 30 days away, this could offer a baked-in, 3%-4% short-term return kicker.