The combination of economic growth and tax reform has led to large, projected earnings increases for 2018, as evidenced in the current 5-point gap between trailing 12-month and forward 12-month P/E multiples on the S&P 500...

In a pattern reminiscent of exactly one year ago, equity markets see-sawed their way higher through the first half of April, recovering from an ugly feeling March. Last year, the context was the White House threatening to terminate tax reform if it could not achieve healthcare reform, something that ultimately proved to be a negotiating tactic. This year, the context is the White House threatening to limit free-ish trade if it cannot achieve targeted trade goals, such as stronger protection of IP. Given time to reflect, investors appear to be recognizing the parallels and are now discounting the White House trade threats as tactics.

The balance of April will focus on more fundamental factors. Q1 reporting begins shortly, and earnings have particular importance this year. The combination of economic growth and tax reform has led to large, projected earnings increases for 2018, as evidenced in the current 5-point gap between trailing 12-month and forward 12-month P/E multiples on the S&P 500 (see attached chart: green = trailing and yellow = forward). 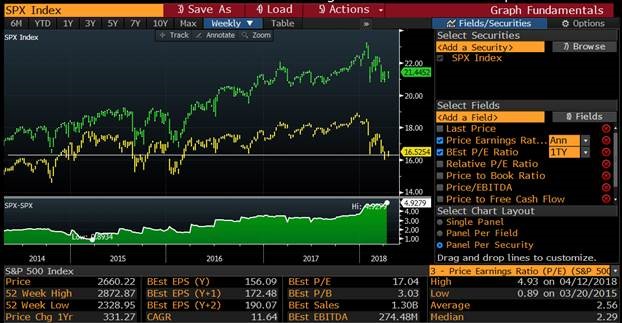 With some of this earnings growth assured via lower taxes, reporting is likely to be a directionally positive event for equities. As a result, April’s recovery in prices is likely to build through the Spring. At the same time, the set-up also increases the likelihood of more dispersion than usual among individual stocks, keeping volatility elevated and overall gains constrained. This is particularly true when combined with the on-going pressure on investment grade bond spreads discussed in the last email, resulting from US cash repatriation.