Interesting Characteristics of the Sharpe Drop

For global risk markets though, the painful memories of 2015’s devaluation are still vivid. While such a move would not meaningfully impact the global economy in the medium-term, in the short-term it would create a perfect focal point for fear...

This week’s sudden, sharp drop in equity markets had some very interesting characteristics:

The first three points tell me that the sell-off so far has been normal, mid/late cycle nervousness. It has been fast and indiscriminate, it came after a good run for equities and it started with the obvious candidates. We have recently discussed themes that have been creating an environment for this – specifically rate expectations for next year needing to rise (which has now started to occur), and earnings growth decelerating as analysts roll to 2019 estimates.

However, points 4 & 5 in the list above are arguably more important. They imply that either: A) this was an isolated equity market sell-off which will mean-revert shortly; or, B) that real fear has not yet been priced in.

The real fear scenario would require a focal point. While there has not been one so far in this sell-off, the same obvious candidate that I mentioned in the previous email exists: devaluation of the Yuan. Recall that the Yuan’s initial devaluation in 2015 triggered a six-month long correction in risk assets globally, with the currency ultimately peaking just under 7.00 (see chart; higher value = weaker Yuan). Since then, financial markets have come to consider 6.95 as the red-line barrier for the Chinese government, a move above which would signal meaningful economic trouble in the country. 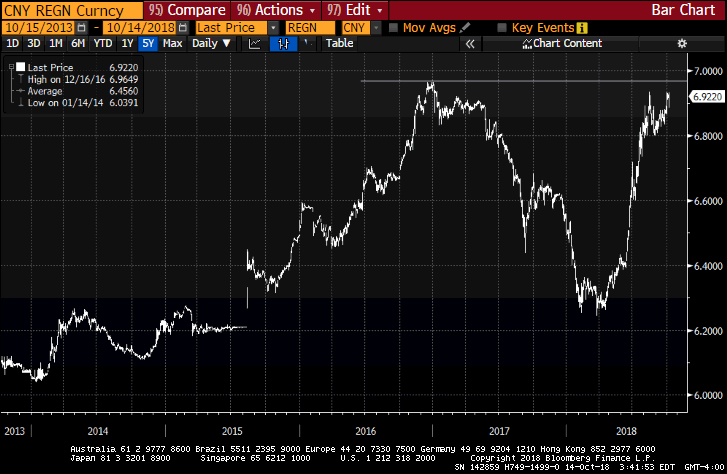 But the currency being weakened beyond that level in the near-term seems to me to be a virtual certainty. China was already dealing with slower domestic growth when the trade war emerged. Now with the very real chance of all exports to the US being subject to 25% tax by Q1, the central bank is lowering interest rates. This of course is exactly the opposite of the Fed’s current trajectory. The resulting rate gap combined with slowing GDP growth puts an enormous amount of pressure on either the currency or foreign reserves. The central bank will need to choose which one it prefers to defend. But why defend the currency? Allowing the Yuan to weaken to just 7.25 would offset 15% of the 25% tariffs, stimulate export growth with other countries and also promote domestic consumption. It is a win-win-win for Chinese policy makers.

For global risk markets though, the painful memories of 2015’s devaluation are still vivid. While such a move would not meaningfully impact the global economy in the medium-term, in the short-term it would create a perfect focal point for fear at a moment when equity markets are susceptible to it. Global equity markets have declined by approximately 5% so far in October; they may bounce back next week, but I would suggest remaining cautious until this currency dynamic plays out through Q4.