Everybody Likes the Halftime Show, Right?

Are we halfway done or just getting started?...

...That is the headline question, with the S&P now down approximately 10% this month. Historically, equity market corrections are driven by a change in perception or liquidity and have resulted in a 15% - 20% drop. Bear markets are driven by falling earnings, typically resulting from a recession, and historically have resulted in a 30% - 45% drop. So what are we looking at today…a change in perception or in fundamentals?

There are four main threads of concern at the moment:

To us, #3 is the most concerning: it is both difficult to disprove in the near-term, while also being an issue that affects fundamentals. That means the reality or the even the perceived reality of issue #3 has the potential to catalyze a full-on, bear market.

Analyzing October’s trading data however, it instead appears that issue #1 is driving this sell-off. Interest rate and inflation sensitive sectors are down the most. Homebuilders are down ~20% for example, because falling new home sales data is inferred to be the result of rising mortgage rates. Energy equities are down 17%, from a feared combination of slower economic growth and correspondingly tame inflation. US Banks are down 10% – in line with the market but notable because the sector’s beta is substantially below 1.0 – because rising rates are feared to be slowing loan growth and making deposits more expensive. Other sectors reacted more-or-less as their defensive or pro-cyclical characteristics would suggest: 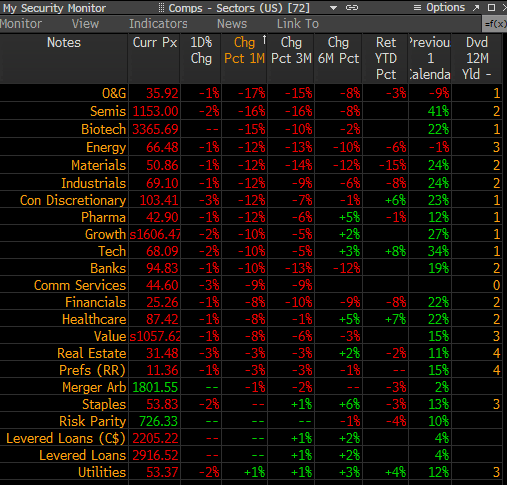 If fear of a slowing US economy is the main concern, it is fairly easy to get comfort that this sell-off is just a market correction. At the most basic level, it is very difficult to have a recession in an economy that is 70% attributable to consumer spending when unemployment is sub-4%. This is particularly true given that the demand impulse from tax cuts will still course through the US economy for another year.

With this “halfway done” perspective then, we are actively looking at the portfolios for equities that are performing meaningfully differently from their sector peers. Such analysis can highlight places to opportunistically increase or decrease our position weights amid the volatility.