Nearing the end of Q1 earnings

After a flurry of updates during the past two weeks, 75% of S&P 500 companies have now reported and a much-better-than-feared Q1 earnings season is fading in the rear-view mirror.

After a flurry of updates during the past two weeks, 75% of S&P 500 companies have now reported and a much-better-than-feared Q1 earnings season is fading in the rear-view mirror. The nature of the results is captured well in the chart below, which shows the weekly evolution of analysts’ S&P earnings estimates: 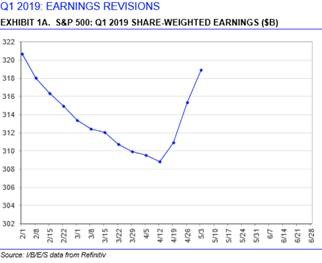 On the other hand, equity markets feel increasingly like they have entered a range-bound phase. While the S&P gained 2% over the period, most of that happened on the first day followed by only minor changes thereafter; meanwhile the TSX and most global markets were flat, and the VIX drifted back below 13.

It is difficult to see clear, near-term catalysts that can push the market in either direction from here. Central banks are on hold indefinitely, the White House appears pot-committed on a trade deal with China, new earnings data will not be available for 2-3 months…even the Section 232 review decision (due any day) seems unlikely to cause anything but localized fireworks in the auto sector. With equity valuations only moderately elevated, the Spring / Summer season seems set up for a non-directional tug-or-war between a “Don’t fight the Fed” upward drift versus “Sell in May…” despondency.

Nothing to See Here

The first half of February has delivered another seemingly steamy rally for North American stock markets. Equities have...