It should be no surprise that a very difficult year has brought forth a very contentious and controversial U.S. presidential election, and that some of the drama is ongoing.

As of this writing, and following an extended period of vote counting and with recounts and lawsuits already a certainty, former Vice President Joe Biden has been projected as the winner. Thus far, President Donald Trump has vowed to keep challenging the results.

Control of Congress still seems headed for gridlock—where each party controls one chamber—but the situation will take more time to resolve. As things stand, Republicans are projected to win 50 seats in the Senate and the Democrats 48, with the final two seats to be decided by runoff elections in Georgia on Jan. 5. This could determine which party controls the upper chamber (with Biden as president, a tie goes to the Democrats as the vice president would cast any tie-breaking Senate votes). Democrats face a high hurdle to take both Georgia seats, in our view. In the House of Representatives, Democrats are expected to retain control, albeit with a smaller majority.

The market is starting to look ahead. The S&P 500 rose 4.2 percent in the three sessions following the election, and so far is unfazed by the various twists and turns with recounts and court challenges. 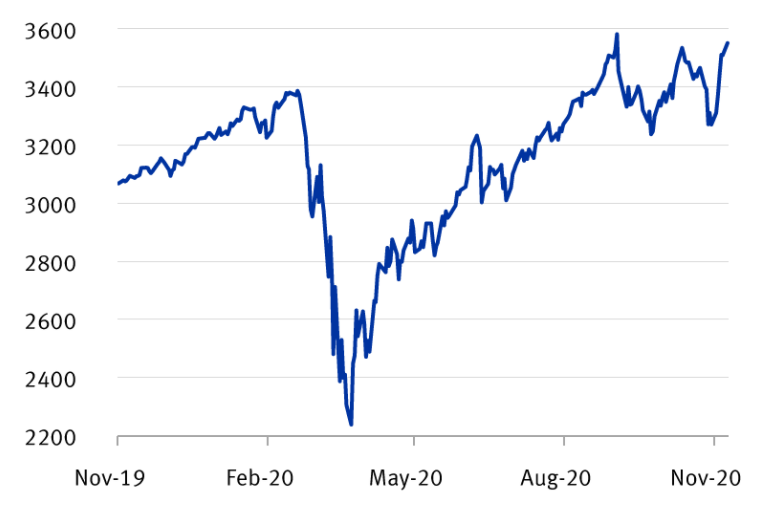 Barring some dramatic legal developments regarding the vote counts, institutional investors seem focused on what a Biden presidency combined with a divided Congress would mean for the equity market and economy.

For starters, this balance of power would likely keep the Trump tax cuts of 2017 largely in place for individuals and corporations for at least the next two years of this legislative session. We think this is a key reason the market rallied in the days following the election. Some investors had feared higher capital gains tax rates on wealthier individuals, along with other tax increases and tax hikes on corporations. These now seem off the table.

Divided government would also mean that far-reaching fossil fuel, health care, and financial industry regulations would be much less likely. These sectors have been held back by election headwinds because market participants believed that all three would face challenges under a “blue wave” scenario. Gridlock would relieve pressure in these areas. However, RBC Capital Markets’ commodity team points out Biden could implement some tighter fossil fuel regulations and green energy initiatives through administrative actions such as executive orders and directives via federal agencies.

We also doubt the Tech and Communication Services sectors at large would face serious regulatory challenges, although select companies could continue to face scrutiny in the near term. The strong rally in these sectors right after Election Day indicates to us that market participants largely agree with this thesis.

Appointments for the presidential cabinet and key posts are another area affected by divided government because Senate approval will be required for most positions. For financial markets, the areas of greatest interest are the secretary of the Treasury and secretary of State (impacts relations with China, including on trade), and any hints about all-important future Federal Reserve nominations.

While the U.S. equity market typically embraces gridlock, there are almost always drawbacks. At times the market wants Washington to move forward on key issues, but it can’t or won’t when power is divided between parties.

For example, market participants have been clamoring for another large COVID-19 fiscal stimulus package, and have also begun to get their hopes up for an infrastructure spending package. These bills would probably be more modest in size and scope with a divided Congress. Fiscal stimulus could be delayed until after the inauguration, and an infrastructure package is no guarantee.

In foreign affairs, it would likely be back to business as usual. We think a Biden administration would take a more activist approach than Trump, similar to the Obama, Bush, and Clinton administrations.

We believe trade policy would shift back to multilateral rather than bilateral trade deals, but the initial focus would be on shoring up and reforming World Trade Organization rules rather than initiating new trade agreements or resurrecting those that Trump shelved. New trade deals will take time, probably well beyond the first 100 days in office in which there is usually a flurry of activity. But we would expect trade frictions with Europe to diminish at the outset. Progress with China would likely take longer. We doubt the Trump tariffs on China will be lifted in the near term.

Biden said that on day one of his administration the U.S. will rejoin the Paris climate agreement, an international accord that attempts to mitigate greenhouse gas emissions and allows members to set carbon emission targets and restrictions for their economies. This does not require Senate ratification.

We think economic sanctions would continue to be imposed in response to perceived national security threats. But they would be less tied to the corporate sphere, as Trump often sought market share wins for U.S.-based multinationals with his sanctions. The Biden administration would confront China in a more targeted way, including in the technology arena, in our assessment.

While the Trump administration focused on developing ties with NATO countries in Eastern and Central Europe and the Baltics, we think Biden would shift back to reestablishing deeper ties with Europe’s major powers, Germany and France. We think NATO’s expansionist agenda would persist.

The market has other catalysts on its mind

The equity market is already beginning to shift its attention to other pressing issues, such as the path of the COVID-19 second wave and the progress of the economic recovery.

Biden stated he will soon lay out an approach to tackling the pandemic, although much of the power will continue to be in the hands of state and county officials.

Economic activity continues to expand in the U.S. 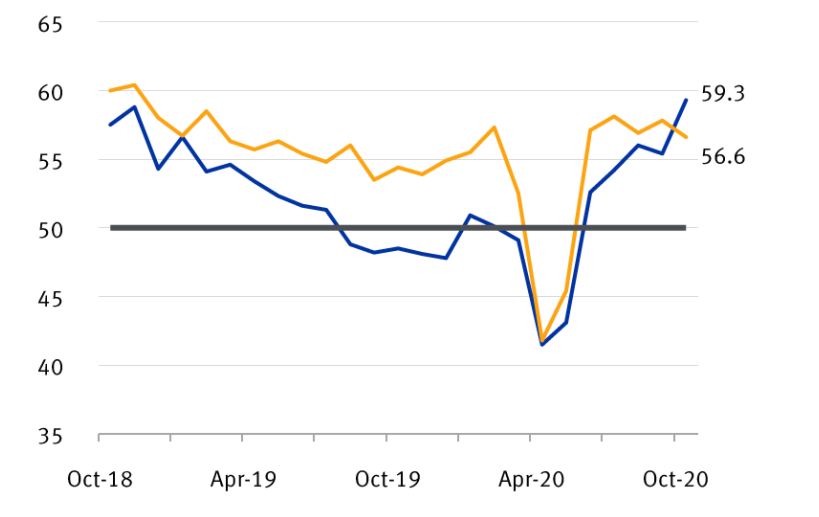 Even though U.S. infection rates have spiked, health officials now have a better handle on how to treat those who are sick. More effective treatment regimens are being implemented, new therapeutics are coming, and vaccine progress is being made. The vaccine developed by Pfizer and BioNTech showed positive results in the first interim analysis of Phase 3 trials, as of November 8. According to RBC Capital Markets, these data indicate the vaccine is on track to be submitted to the FDA for approval in the third week of November and, if approved, could start to be rolled out before year end. There are other vaccine candidates in the U.S. and around the world as well.

The economy and corporate profits have substantially improved since the COVID-19-induced recessionary lows of last spring. The manufacturing and services sectors are expanding, and unemployment has dropped below seven percent. We think GDP and corporate earnings have scope to grow further in the next 12 months as the recovery becomes sturdier and COVID-19 is ultimately tamed.

We would stick with long-term investment plans, even in the face of any lingering post-election-related volatility. The U.S. economy could reach its pre-pandemic level by the end of 2021 or by the first half of 2022 at the latest, in our view—a much shorter time frame than it took following the global financial crisis.

Non-U.S. Analyst Disclosure: Jim Allworth, an employee of RBC Wealth Management USA’s foreign affiliate RBC Dominion Securities Inc., contributed to the preparation of this publication. This individual is not registered with or qualified as a research analyst with the U.S. Financial Industry Regulatory Authority (“FINRA”) and, since they are not an associated person of RBC Wealth Management, they may not be subject to FINRA Rule 2241 governing communications with subject companies, the making of public appearances, and the trading ofsecurities in accounts held by research analysts.