Ilana Ben-Ari had a passion for enacting social change, and an idea that she thought could be a game-changer. The rest was something she'd have to figure out as she went.

Multiple awards, a TEDx talk, and a Time Magazine mention later, Ben-Ari's Twenty One Toys is active in 49 countries.

But flash back a few years, and Ben-Ari was in a much different place. She had a product: a tactile wooden puzzle she had designed for the visually-impaired community that forced players to collaborate with each other while blindfolded. But she soon found the "empathy toy" might have use for a larger audience.

“I would test it during the day with visually-impaired students and then at night with sighted adults. And I was getting the same responses, like challenge and frustration, but also this incredible creative language," says Ben-Ari, who was then an industrial design student.

Part of her inspiration for the toy was her feeling that 'soft skills' like creativity and emotional intelligence were being ignored by the traditional school system.

“A kindergarten student is wildly creative working on not just their creativity, but also their collaboration, their social and emotional skills. Then before grade one that stops being a priority, and then we focus on a lot of reading, writing, arithmetic," she says.

The obvious next step was to find a company that would buy the idea from her to develop as a product, but she ran into a hurdle many young designers face.

“Shockingly, no company existed that wanted to produce empathy toys," she says with a laugh. “But I thought 'I think I can do this'."

Getting a business started

She founded Twenty One Toys and managed to make her first sale to a school board in Ontario, bootstrapping along the way and trying to change her mindset to that of a business owner.

“I just had this idea that (being an entrepreneur) is just for serious business people, and I'm just a designer, and also the gender stuff played into that as well. I didn't picture myself as a business owner."

Accolades flowed in, including “Best in Show" at a competition by the Association of Chartered Industrial Designers, and being named by Time Magazine as “one of six new technologies that are changing the classrooms of the future". What she was lacking was funding, business experience - and a support network.

“I was still working until midnight or two in the morning," she said. “Most entrepreneurs don't pay themselves in the first few years, and it's just a huge, huge struggle."

That's when she heard about SheEO.

The success of women supporting women

The Toronto-based non-profit, sponsored by RBC, launched in 2015 with the goal of supporting and financing female entrepreneurs using a unique crowdfunding approach, describing itself as "bringing out the best of women by being radically generous to one another."

Each year, SheEO recruits groups of 500 women “Activators" who each donate C$1,100 to a fund, which then makes zero-interest loans to a small group of winning enterprises run by women. The loans, which are usually around $100,000, are paid back interest free over five years.

“I went into it pessimistically," she says. “There are a lot of organizations that say they want to help women, but I find it's hard to know when an organization is doing it for the right reasons."

But her pessimism didn't last long. “It was the most phenomenal life-changing experience," she says.

One intense experience early on was negotiating for her share of the $500,000 investment pot with the other four entrepreneurs in her cohort. The rules were that they couldn't divide the money evenly and it couldn't all go to one venture.

“There was so much love and support … but wasn't entirely Kumbaya," she says. “We held each other accountable, we were really quite tough on each other. We opened up all of our financials, and we needed to make sure that what each person got would make a phenomenal difference and that they'd be able to pay it back."

Being part of SheEO also meant she received coaching for a year, and was welcomed into a community of female entrepreneurs and business leaders.

“No only did the corporate training side of my business take off, but we were introduced to some of our biggest clients." She was also able to hire a full-time employee and launch production without draining her own finances.

Twenty One Toys is now on the verge of launching its next product, the Failure Toy, which is designed to challenge the idea that failure is something to be feared and hidden, but instead something that can be developed as a skill.

Ben-Ari is now herself an Activator for SheEO, which recently named eight new winning Ventures at their annual summit in Toronto. 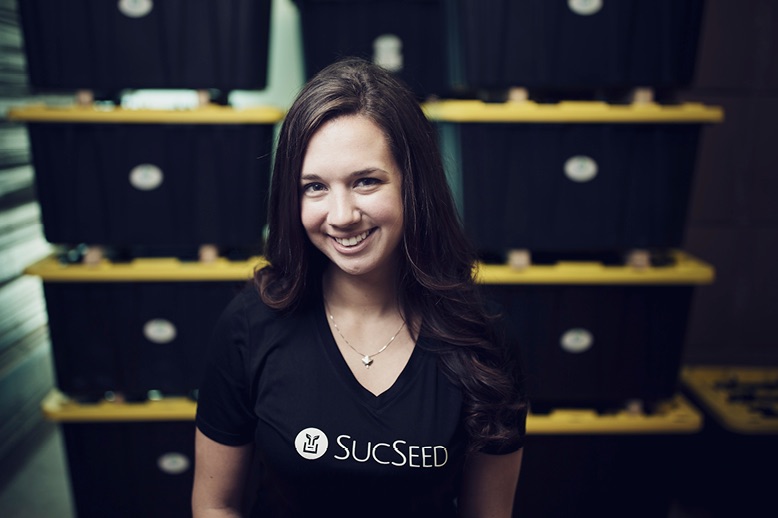 Much like Ben-Ari, Emily Bland had a hard time imagining herself as an entrepreneur. Growing up on a farm in central Newfoundland, she was steeped in agriculture, but chose to study accounting instead.

But while in school at Memorial University of Newfoundland, she found herself thinking about food scarcity and the high prices of imported fruit and vegetables in her home province.

“People in some communities were unhappy with their food supply, people paying $9 for a mouldy pepper in Northern Labrador. So we kind of came together to see if there was something impactful that we could do," she says.

As part of the Enactus entrepreneurial program at Memorial, she and a group of students brainstormed a hydroponics system that could allow people to grow fresh vegetables in their home without soil or sunlight.

“At the time our big goal was to push 15 of these units in Northern Labrador, and we thought if we could do that then we'd have saved the world," she says. However, after a newspaper story about the venture, they were flooded with emails.

They launched a plan to build 100 kits, then use a portion of the profits to donate the 15 kits to Northern Labrador. A year later they had 500 systems operating across the country, along with requests from international purchasers.

“Until this point it had been run completely as a volunteer organization, but it started to kind of outgrow the accountability behind a volunteer group, so it started to need people that would be full time working on it," says Bland.

She pitched the idea of starting a social enterprise to the other students on the team, and gave it the name “SucSeed". Then she made the decision to quit the accounting job she had lined up after graduation. “A couple of weeks before I was supposed to start, I kind of had this epiphany that this was now where I was supposed to be and I really needed to follow my heart," she says.

She was pondering the next moves for SucSeed when someone sent her a link to the SheEO application. The deadline was the next day.

“I sat down in my pyjamas with a glass of wine and filled out the application and had hope that something would come through, but I never ever expected it," she says. “Got the call that we had made top seven, and it was just the biggest relief."

The funding has allowed to SucSeed to accelerate its growth, and the company is now looking at exporting to markets in the United States and Europe. Bland says the SheEO network has given her the grounding to take a step she might not have otherwise taken.

“I think I came into it a year ago really unsure if I was even supposed to be an entrepreneur," she says. “Personally, SheEO gave me the confidence that it was OK to be me."

We asked successful Canadian female entrepreneurs to share their stories and offer advice on how to support aspiring female business owners get ahead:

Empathy enables leaders to create motivated teams and productive cultures, and equips employees to understand customer needs. Failure is key to developing resilience and a growth mindset – arguably some of the most important attributes required during...

Women and health: Planning a legacy in the face of longevity

Statistics show 70 percent of new Alzheimer’s patients are women. What you need to know about planning for long-term care.