Year 2 of COVID-19 is seeing Europe stumble. We look at what’s delaying the recovery and what the environment means for portfolio strategy.

Having navigated the first stage of the COVID-19 crisis reasonably well, with an aggressive lockdown strategy that helped cap fatalities, Europe is now stumbling. Struggling to roll out vaccines, facing new virus variants, and with a fiscal stimulus injection that is more longer term in nature, its economic recovery has been lagging that of the U.S. But we believe Europe’s recovery will eventually pick up and the region should benefit from global reflation, which would bode well for equities as the European stock market is well-geared to reflationary stocks. We look at the implications for portfolio strategy.

With the U.S. economy turbocharged from the recent $1.9 trillion COVID-19 relief package—RBC Capital Markets recently upgraded its 2021 U.S. GDP growth forecast to eight percent—it is not surprising that most other regions’ short-term prospects pale in comparison. 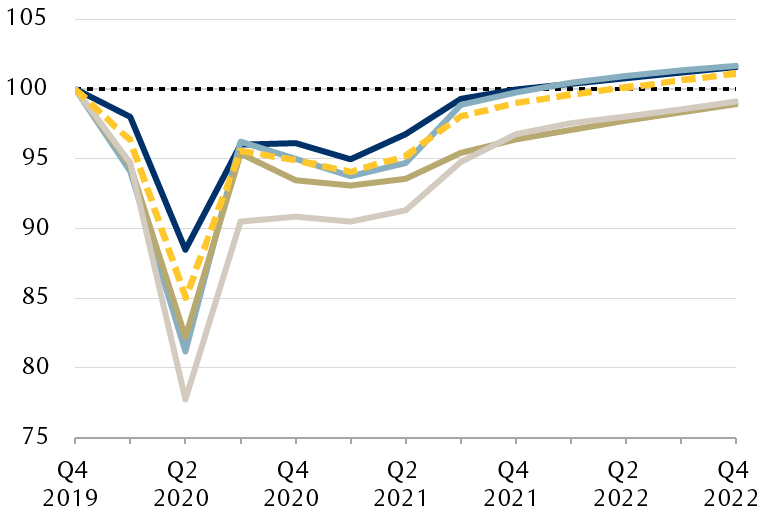 Meanwhile, the new variants and a bungled vaccine programme have conspired to plunge much of the continent back into lockdown. RBC Global Asset Management Inc. Chief Economist Eric Lascelles uses Google Mobility data to illustrate the reopening divide between parts of the U.S. and Europe: Texas retail and recreational activity is now back to pre-pandemic norms, whereas it remains 47 percent below in France.

Yet the third COVID wave should have a lesser impact than previous ones. After all, by now, the most vulnerable have been inoculated, even though Europe has achieved a mere 15 doses per 100 people (vs. 42 doses per 100 people in the U.S.). Warmer spring temperatures may well limit the spread of the virus, while, as observed elsewhere, individuals and businesses have largely adapted to the new circumstances. Still, developments over the next few weeks will tell whether this assessment proves too optimistic.

Fiscal stimulus will help, but not to the same extent as in the U.S. this year as the EU is taking a markedly different tack. Instead of the U.S.’s approach of one-off cash injections targeting households, the EU has opted to invest in long-term competitiveness. The EU’s €750 billion recovery fund, representing over five percent of the region’s GDP, will focus on underpinning the recovery by deploying 40 percent of the funds for green spending and 20 percent for the digital transition, with the rest earmarked for infrastructure. The funds, which will start to be disbursed in the second half of this year, through to 2026, will only be made available to national governments if progress on certain reforms is made.

This package follows up on 2020’s substantial fiscal response whereby national governments stepped up to mitigate the economic impact of the lockdowns on households and businesses via a combination of grants, support measures, and loans. Most countries made existing labour market support schemes more generous by increasing the level of payments, extending their duration, or making them easier to access. As a result, RBC Capital Markets estimates the EU fiscal deficit reached 10 percent of GDP in 2020. The stimulus proved effective as it prevented the unemployment rate from ballooning (currently 8.1 percent vs. the pre-pandemic level of 7.4 percent) and buttressed household income. Q4 2020 retail sales in the euro area were one percent higher year over year, a remarkable outcome given the hit the economy had taken.

Time will tell whether the EU’s more measured approach to fiscal spending proves successful. Not to opt for a U.S.-style one-off cash injection may well be prudent given how quickly the European economy recovered following the end of the 2020 lockdowns: after Q2 2020 GDP plunged by 11.6 percent, Q3 GDP bounced back by 12.5 percent.

For now, the European Central Bank (ECB) will do its part to maintain accommodative monetary policy, having recently intervened to ensure financial conditions do not tighten.

RBC Capital Markets expects GDP growth of 4.1 percent in 2021, driven by the release of pent-up demand and household savings, which accumulated during the pandemic to the equivalent of more than three percent of GDP. Moreover, exports—more than 45 percent of GDP—should benefit from the pickup in growth in the U.S. and China. Admittedly, downside risks are lurking as growth could be compromised should new COVID-19 variants prove too difficult to control and social distancing measures need to be extended much beyond the spring.

The failure to provide an adequate vaccine programme is also taking a toll on European politics. This is important as both Germany and France will have national elections over the next 13 months.

For Germany, while the current conservative coalition remaining in power remains the most likely outcome, there is a rising possibility that a left-leaning coalition wins enough seats to form a government. Should the latter occur, increased regulations such as in the labour market would be a concern, as they could cap economic growth.

In France, Marine Le Pen of the far-right National Rally (the former National Front) is trying to capitalise on the situation by shedding her anti-euro rhetoric. She is instead focusing her campaign for president on hardline positions on immigration and national security. As such, a Le Pen victory at the 2022 presidential election would be less of a systemic shock than it would have been in 2017.

We recommend a Market Weight stance, or up to a benchmark position, in European equities. The eventual reopening of economies, fiscal support, and the ECB defending its accommodative monetary policy make for a conducive background for risk assets.

Our national research correspondent points out that European equities typically outperform when U.S. bond yields rise as they have comparatively high exposure to sectors that are beneficiaries of rising yields, such as Banks, Industrials, Consumer Discretionary, and Materials. Conversely, they have relatively lower exposure to Technology and Communication Services, sectors that tend to underperform in that environment. So, despite the EU’s more subdued growth backdrop, European equities have more than kept pace with their U.S. counterparts since the rotation into value started last November.

Given the state of the recovery, the ECB is likely to embark on a monetary tightening cycle later than other central banks. This will likely weigh on the euro, in turn providing a tailwind to corporate earnings.

The MSCI Europe ex UK Index trades at a more than 20 percent discount to the S&P 500, but trades roughly in line with it on a sector-adjusted basis. We continue to favour the Industrials and Consumer Discretionary sectors as we believe they are well-positioned to benefit from both an improving global economy and long-term secular trends.

This article was originally published in the Global Insight Weekly with the title "The recovery divide."

While it will still be a long way back, the recovery is exceeding expectations. We look at where things stand for key regions as they reset growth.