And just like that the script has flipped. Is this is a healthy correction? We unpack the market’s move and what it means for portfolio strategy.

The U.S. Technology sector selloff, which preceded the U.S. Labor Day holiday, spilled over into this week and tugged at other markets. The Tech sector corrected 11.4 percent over just four trading days, while the FANG+ Index—Facebook, Amazon, Apple, Netflix, and Alphabet’s Google along with other tech-oriented stocks—dropped 13.6 percent. Crude oil had its worst one-day price contraction since June, dragging the U.S. and Canadian Energy sectors down roughly five percent over the four-day period.

There was no clear catalyst for this profit-taking. Seasonality, with institutional investors adjusting portfolio positions after the summer, probably played a role. Heightened options activity was widely cited as well. And it may be that jitters that COVID-19 social-distancing measures could be enforced for longer also contributed to the pullback.

An initial V-shaped economic rebound is being achieved and should be reflected in strong U.S. Q3 GDP data. However, the tail risks for growth—both to the upside and downside—in Q4 and beyond are “enormous,” according to Tom Porcelli, chief U.S. economist at RBC Capital Markets, LLC.

While global economic data remains sound, with most countries’ economic indicators consistent with an ongoing recovery, momentum seems to be plateauing in certain regions.

A longer-lasting correction cannot be ruled out. After all, the 10 percent fall in the Nasdaq in September barely dents its recent outperformance.

Moreover, we pointed out in the September issue of Global Insight that the increasingly narrow leadership of the S&P 500 could build distortions into the market if fund managers are forced to buy into stocks just to keep pace with the benchmark, or if others are reluctant to sell these stocks. We suggested it could be painful for market performance if the situation eventually unwinds.

As this correction has taken aim predominantly at Tech stocks, comparisons with 2001 are being drawn. Yet we think parallels to the bursting of the tech bubble are overstated. Back then, the U.S. Federal Reserve was actively withdrawing liquidity, having spent the previous year adding liquidity to buttress financial markets as they dealt with the fallout from the demise of the Long-Term Capital Management (LTCM) hedge fund and Y2K preparation. As the Fed stepped back, and at the same time many phantom dotcoms were exposed with unsustainable valuations, equity markets swooned.

Prospects for continued liquidity support are more encouraging today. The Fed’s recent 2020 Economic Policy Symposium made clear that the Fed intends to keep interest rates low for a long time, abandoning its long-held policy of pre-emptive interest rate increases to fend off higher inflation. Other large central banks, such as the European Central Bank, the Bank of England, and the Bank of Japan, have very supportive monetary policies that should remain in place for a prolonged period of time.

Finally, the fundamental underpinnings of tech-oriented stocks within the various sectors of the U.S. market (Tech, Communication Services, and Consumer Discretionary) today are superior to those of the tech bubble era. Many stocks within these segments have sound business models, years of earnings growth behind them, and opportunities ahead, in our view. In contrast, numerous dotcoms that fueled the tech bubble had weak business models with little or no earnings prospects, and they exited the stage in short order.

Many, including us, had pointed to the diverging fortunes of Wall Street and Main Street, with the stock market roaring alongside key segments of the economy struggling to make a comeback—small and medium-sized businesses in the U.S. are still hobbled, for example.

But as the seemingly unstoppable U.S. stock market had been driven by the tech stocks that prospered in the new COVID-19 digitized world, the peculiarity of stock market gains were rationalized away—as is usually the case during periods of outsized gains. The FAANG stocks (Facebook, Amazon, Apple, Netflix, and Google parent Alphabet) thrived in this environment thanks to their market dominance. Their earnings growth beat already demanding market expectations as other sectors floundered. General enthusiasm for these growth stocks soon settled in. Thought to be in short supply, investors were willing to pay a growing premium for them. 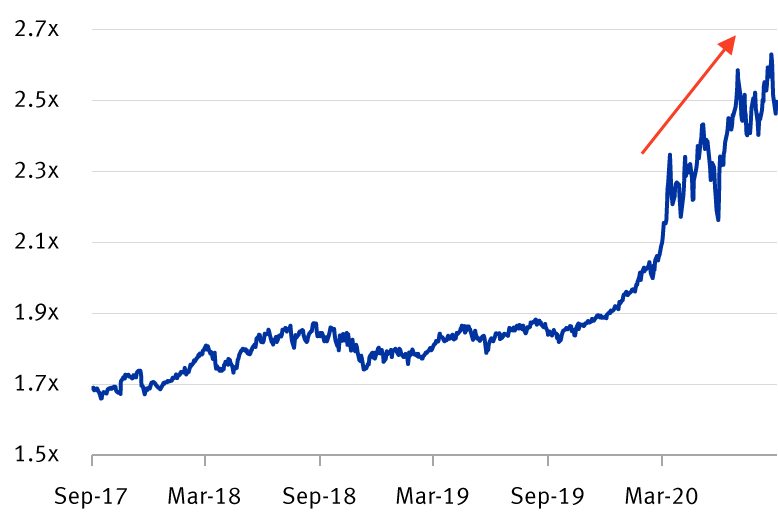 Euphoria was not confined to the FAANG group. Our national research correspondent points out that the fondness for growth stocks extended to the broad Technology sector and Health Care stocks—two sectors whose prospects could be boosted by the COVID-19 environment. More than 30 stocks in the mid/large-cap S&P universe returned more than 100 percent in 2020 through September 2, the market’s all-time high, while more than 90 stocks returned over 40 percent in the same period. This far outstrips the S&P 500’s 11 percent gain and the S&P MidCap 400’s five percent loss.

The fundamentals of the 30 biggest leaders, those whose share prices more than doubled in the period, are certainly firm. These companies generated rapid and impressive sales (some 30 percent on average) and earnings growth (some 50 percent on average). They enjoyed stronger balance sheets with net cash close to twice as large as their operating cash flows on average; and they reinvested more in capital expenditures and research and development—the equivalent of some 25 percent of revenues. While these companies clearly possess superior earnings quality, their year-to-date share price returns seem somewhat stretched nevertheless.

Investors should brace for more choppiness in the months ahead, with COVID-19 infection rates remaining in the headlines, U.S. elections approaching, U.S.-China tensions ratcheting up, and Brexit challenges lingering. Valuation levels, with the S&P 500 trading at 20.1x the 2021 consensus forecast of $166 per share, suggest that complacency had set in during the summer. We doubt it has been fully flushed out. Pullbacks are a good opportunity to review portfolio positioning and holdings, in our view, and to tweak allocations if necessary.

What is sustainable technology?

Companies and industries at the forefront of developing technology solutions to sustainability issues may offer compelling long-term investment opportunities.