The Fed appears to be shying away from further policy action as conditions remain favorable. But it stands ready to move should action be required.

Since the Fed last met in July, there has been a tone around the Fed’s official comments that has raised some doubt about the need for, and perhaps the willingness of, the Fed to do more in terms of monetary policy at upcoming meetings, most notably from Minneapolis Fed President Neel Kashkari, one of the Fed’s more dovish policymakers:

“The path of the virus is going to determine the path of the economy, so the most important thing anybody can do is get our arms around the virus. Until we get there, I’m not sure that there’s a lot more for the Fed to do right now.”

And this sentiment was broadly reflected in this week’s release of the minutes from the Fed’s July 28–29 meeting, which sparked modest consternation within markets ahead of what has been a highly anticipated September confab where market expectations for not only expanded policy tools, but also the potential for new ones, have run high. The first of the three key tools the market is focused on, yield curve control, appears to have been placed firmly on the back burner:

“A majority of participants commented on yield caps and targets as a monetary policy tool … most judged that yield caps and targets would likely provide only modest benefits in the current environment, as the Committee’s forward guidance regarding the path of the federal funds rate already appeared highly credible and longer-term interest rates were already low.”

On that note, forward guidance, the second tool in focus, may not see any changes in September as Treasury yields remain historically low across the curve, a reflection that market expectations are well-anchored with respect to the path of policy rates, thus reducing some urgency at the Fed to update its forward guidance on rates.

The debate continues over how exactly to do this, whether by tying future interest rate moves to inflation goals, labor market goals, calendar-based outcomes, or some combination or all of these. While changes could come at the September meeting, the minutes only stated that this guidance for markets would only be needed “at some point” in the near term.

Finally, the third tool, asset purchases, is unlikely to see any changes come September. The minutes acknowledged that the current structure of $80 billion per month in Treasuries and $40 billion in mortgage-backed securities is likely already providing accommodation beyond simply providing market liquidity via lower Treasury yields, and that already-low yields limit the need for further accommodation.

Hurry up and wait

So does all this raise the risk that the Fed could disappoint the markets? We don’t believe so. At this stage the Fed is probably right in its assessment that there’s little urgency to build upon and expand its current suite of policy tools until the paths of the pandemic and the economic reopening are clearer.

Financial conditions—or a broad measure of market accommodation based on the level of interest rates, the dollar, equity markets, and corporate bond credit spreads—remain not only near the easiest levels on record, but the stress typically seen during U.S. recessions never really materialized, largely due to the Fed’s quick and decisive action.

The Fed’s aim in March was to keep markets functioning and to buy the economy time. Those actions also bought the Fed time in assessing the next phases for monetary policy. The Fed remains “all in,” and will continue to do all it can to support the recovery and markets. The key risk, and the Fed has been atypically vocal about this, is the need for further fiscal stimulus—and progress there into the first half of September will likely dictate the outcome of the Fed’s September meeting more than anything else. Beyond policy, the Fed will be updating its economic projections for the first time since June and could be at risk of a downgrade absent fiscal support.

Lastly, and largely unnoticed, the Fed’s much-vaunted corporate bond buying and lending facilities launched at the early stages of the pandemic have been gradually slowing down in recent weeks as credit markets have essentially recovered to pre-pandemic levels of strength and liquidity. The Fed has completely ended the purchase of corporate bond exchange-traded funds (ETFs), and is only buying individual corporate bonds at a daily pace of $20 million, down sharply from month-ago levels and barely a fraction of the $20 billion that trades in U.S. corporate bond markets on any given day.

The Fed's corporate bond purchases slow to a trickle 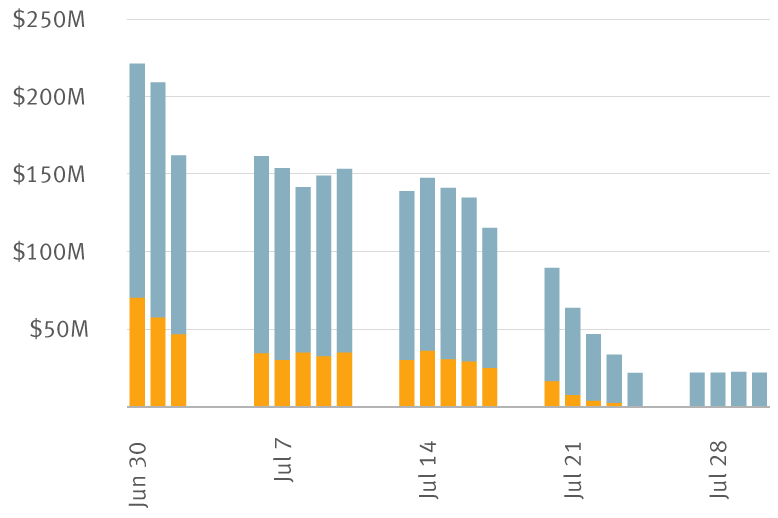 We see the Fed maintaining this token pace as it wants to maintain as much market-based pricing of risk in credit markets as possible, where an increase in corporate bond buying is only likely in the event of another bout of illiquidity to support market functioning.

The Fed goes on call

The Fed remains an integral part of the economic recovery and market functioning, but at this stage the Fed is right in its assessment that monetary policy remains well-positioned and accommodative as structured, in our view. Markets can expect the Fed to step back in more forcefully should conditions warrant it, but like the rest of us, the Fed awaits clarity on the trajectory of the public health crisis. The Fed will remain on call, if and when needed.