With the unprecedented storming of the U.S. Capitol building following one of the most controversial presidential elections in history, and the related violence and bloodshed, why is the U.S. equity market acting as if nothing much has transpired?

On Wednesday, the fulcrum day, the S&P 500 rose 0.6 percent. On Thursday, it tacked on another 1.5 percent. The Dow Jones Industrial Average fared well also, and small-capitalization indexes were even stronger.

The S&P 500 is hovering near its all-time high and its valuation is well above average following the biggest recovery rally since the 1960s.

Yet we’ve just experienced a tragic day in American history, and there are a multitude of challenges facing the country. In the past, the market has sold off time and time again on issues of much lesser importance. Is the market defying logic?

The straightforward answer is yes and no.

First off, we think it’s naïve to assert that the massive ideological divisions that exist in the country—if left unchecked—won’t ultimately lead to negative consequences for broader society and the economy and asset prices at some point in the future.

And we think it’s equally naïve to assume the divisions will be mended anytime soon.

In this respect, the market could be rightly accused of defying logic with its sanguine response to the turmoil shaking the country.

But the U.S. equity market is not currently and has never been a real-time barometer of the overall ideological and institutional health of the nation. As we’ve previously written, “the market” doesn’t necessarily reflect Main Street or even American society as a whole.

Simply put, the major U.S. equity indexes represent the future prospects of corporate earnings for many of the largest and most successful companies in the world. When we own stocks, we own a portion of these profit streams.

The market is not blue, red, or even purple in its ideology. And to some degree, it’s not even red, white, and blue, as a portion of the revenues comes from overseas via large and mega-sized multinationals that are domiciled in the U.S. and also have operations elsewhere.

In reality, the market is mostly about green—as in profits.

The reason the S&P 500 and other major indexes were not defying logic by rallying on Wednesday and then scooting higher on Thursday, is because at this stage market participants perceive that Democratic control of the Senate, combined with the House of Representatives and White House, will lead to greater fiscal spending on COVID-19 relief and other federal initiatives, and would support economic growth.

The market has had a voracious appetite for fiscal stimulus since the pandemic began, and wants more—above and beyond the significant stimulus that has already been doled out. It seems hungry for clean energy infrastructure spending, too.

We think the market is also at ease with the party control scenario because this Democratic “blue wave” will be somewhat restrained, in our assessment. There is a big difference between a 5–10 foot wave (akin to narrow control of both chambers of Congress that Democrats will have) and the power of 30–40+ foot winter waves that break at Mavericks (akin to strong congressional majorities).

Thus far, risks of tax increases are not at the forefront. We think this is because razor-thin Democratic control in the Senate, combined with the party’s narrow majority in the House, makes passing sweeping, substantial tax hikes difficult to achieve.

Also, in our view, politicians generally recognize that raising taxes in the early stages of an economic recovery and amid persistent COVID-19 economic challenges would be ill-advised, and this effectively reduces the risk of substantial tax increases—at least in 2021.

The strong rally in the major U.S. equity indexes in the past couple months, combined with the significant surge since the March 2020 lows, raises questions about the sustainability of the moves. Technical indicators point to an increased risk of a near-term pullback, in our view. That said, most broad averages are not far above where they were back in Feb. 2020 before the COVID-19-related retreat began. Nor are the typical harbingers of a bigger, more prolonged retreat in share prices anywhere in evidence—e.g., a breakdown in market breadth or a sustained, multi-month decline in small caps. In fact, the opposite is true: advance/decline lines have been making new highs ahead of the indexes and small caps are leading the charge.

The market has rallied substantially since the March 2020 low, but isn’t much higher than the pre-COVID peak 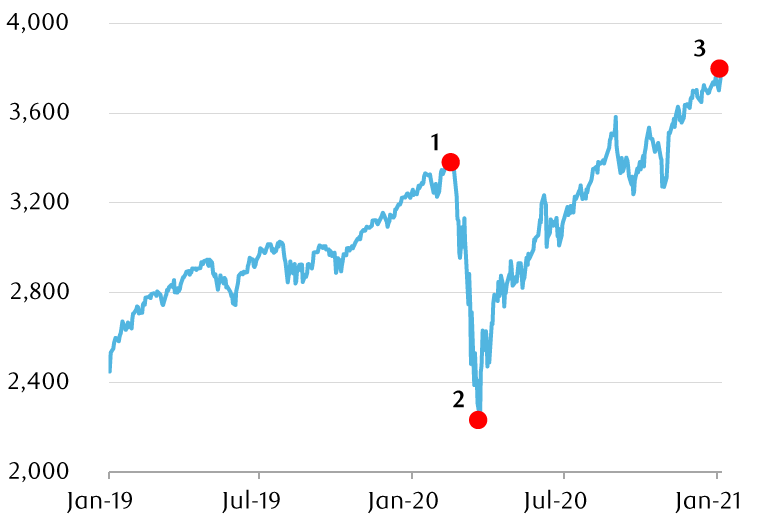 But even if the market takes a much-needed rest or retreats somewhat, we think it has the potential to deliver worthwhile all-in returns for the year. We expect corporate profits to gain more ground as the economic foundation becomes sturdier with the help of ongoing ultra loose monetary policies, another round of fiscal stimulus, and the ultimate taming of COVID-19 headwinds.

To start the year, we would Overweight U.S. equities. We would position portfolios with a mix of cyclical (economically sensitive) and defensive dividend-paying sectors, with a tilt toward the value side of the fence.

This article was originally published in the Global Insight Weekly with the title "Is the market defying logic?".

Emerging markets beyond COVID-19: A ripe climate for investors