While this week’s Fed meeting lacked any of the Fed fireworks we have seen over the past two months, Fed Chair Jerome Powell again spoke forcibly, stating, “we are committed to using our full range of tools to support the economy in this challenging time, we are going to use them forcefully, proactively and aggressively until we are confident that we are solidly on the road to recovery.”

And those tools, or the Fed’s big stick in this case, have been the wide swath of lending facilities announced that have cajoled markets back into a more-normal state of operation—even as most of them aren’t even up and running, while others stand barely used. 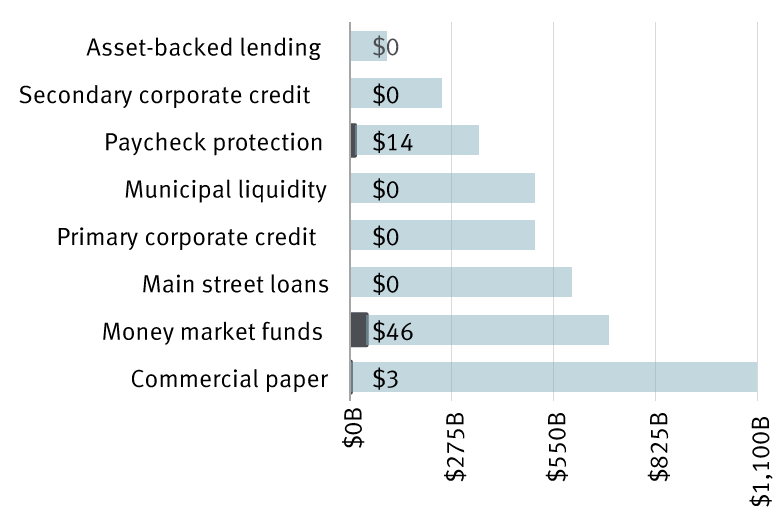 The $2.3 trillion in credit facilities that were announced to much market fanfare at the beginning of April still aren’t ready, with Powell unable to put a date on any launch, simply stating that they would be ready “soon.” But even so, markets have already largely reopened and are again functioning smoothly. New corporate bond issuance, as companies look to shore up liquidity, has reached record highs, while even speculative-grade companies have been able to access capital markets to the greatest extent since last year.

While the Fed’s balance sheet crossed the $6.5 trillion mark this week, up from $4 trillion at the start of the year, as it continues to buy Treasuries at a daily pace of about $10 billion, the actual utilization of these credit and lending facilities that are backstopped by the Treasury via funds allocated from the CARES Act might actually go largely unused. For now it seems the simple threat to act has been sufficient for markets, but that the facilities will stand ready to act as a powerful backstop should another bout of volatility rock markets.

If there was any disappointment in this week’s Fed meeting, it was the limited amount of forward guidance, with the statement simply saying, “The Committee expects to maintain this target range [0 percent to 0.25 percent] until it is confident that the economy has weathered recent events and is on track to achieve its maximum employment and price stability goals.”

So what might that mean for the path forward for interest rates? After the Fed first cut rates to zero percent in December 2008, it took a full seven years until December 2015 for the Fed to leave the zero percent lower bound. We don’t expect it to take that long this time around, but believe it will almost undoubtedly be a multi-year process.

As was the case then, the primary bar for beginning to raise rates will be a return to full employment. The difference now is that the Fed is likely to judge the level of full employment as being even lower. In 2015, the unemployment rate had converged with the Fed’s estimate of full employment at five percent, which then kicked off the rate hike cycle. When the Fed last provided economic estimates in December 2019, it had estimated that level at nearly four percent. In our view, that should provide a rough approximation for when the Fed may again leave the zero percent lower bound. 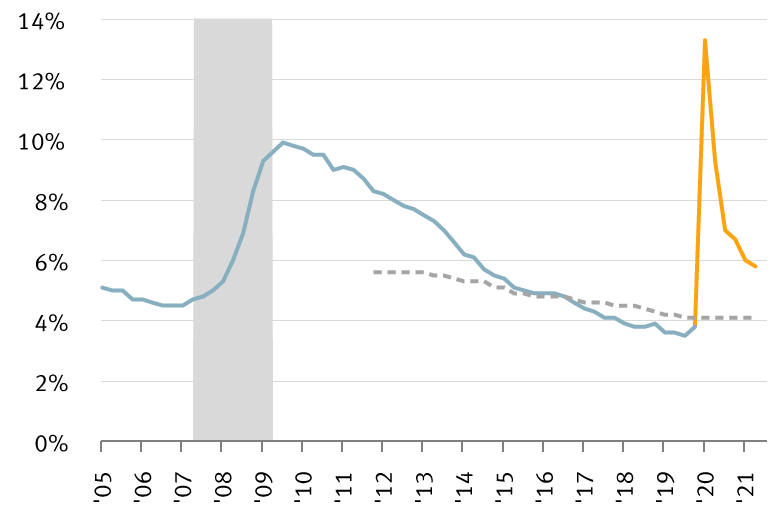 That will take time. RBC economists currently project that the unemployment rate will only fall under six percent by the end of 2021, after averaging 13.3 percent this quarter. And the recovery from there would likely be more gradual; the last move from six percent to four percent unemployment took place over the course of four years from 2014 to 2018.

In our view, the Fed has been largely successful in its stated goal of ensuring financial markets continue to operate smoothly. As the economy edges closer to at least a first phase of reopening, we don’t believe the Fed is anywhere near the point of pulling back on the reins. While questions remain about the large scale of fiscal and monetary support, the Fed’s approach of speaking loudly while carrying a big stick appears to be working, and may actually limit what it might ultimately need to do.