North American equity markets advanced in a holiday-shortened week in Canada as investors continued to digest second quarter earnings reports and management outlooks for the balance of the year. This week will be remembered for the horrifying explosion that devastated Beirut, the capital of Lebanon, on Tuesday. Our thoughts are with the victims of this terrible accident at this time, as the population of a country already suffering from mass coronavirus outbreaks, and a subsequently weakened economy, adds recovering from this tragic event to the list of challenges they must currently face.

The coronavirus continues to dominate headlines, and many countries continue to be plagued by outbreaks and challenges. Regions such as Southeast Asia, Central and South America, Africa, Russia and India remain hotspots with elevated new cases, while many other regions, including locations in Europe, Australia, and Japan, are dealing with the emergence of new infection waves, and in some cases, struggling to contain them.

The U.S. is a country that we have been following closely amid worryingly high numbers of new cases in recent months. Positively, there is strong evidence that the number of new cases appears to be plateauing, with signs of decline in many of the hardest hit regions, while the number of hospitalizations across the U.S. are also trending lower. Specifically, the F-CAT states (Florida, California, Arizona, and Texas), who experienced high case counts since reopening in early-May, have now realized a noticeable decline in new daily cases, as shown in the below figure which was provided by Fundstrat Global Advisors.

Consistent with what we saw last week, the number of fatalities continues to rise, which is expected because deaths lag new cases; however, the good news is that the mortality rate remains far below what we saw earlier in the year. We are hopeful that recent signs of a plateau will mark a near-term peak in new cases. The below figure, again provided by Fundstrat Global Advisors, shows the rolling 7-day delta of new cases for the United States – the past 12 consecutive days have shown daily new cases decreasing at a progressive rate. 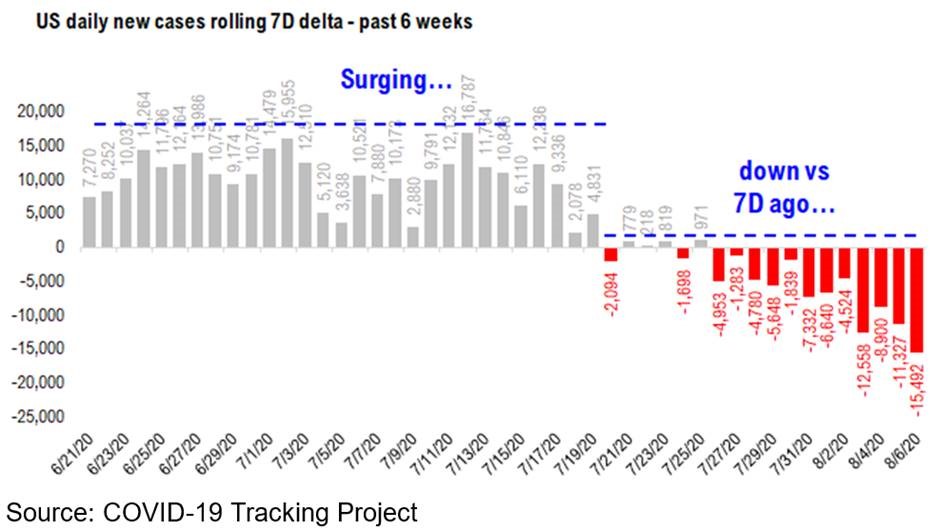 It appears that many States have been successful in implementing restrictive measures such as mask requirements and social distancing, which is encouraging as it suggests that surges can be managed without resorting to full economic shutdown.

The U.S. government continues to be at a stalemate regarding how to extend stimulus measures to combat the economic damage wrought by the pandemic. While this discussion appears to be taking longer than expected, we believe there will be a resolution announced in the near future given it is an election year in the U.S. and there is broad support amongst voters for additional stimulus spending. We would expect markets to respond positively to constructive news on this front, particularly if the size of the stimulus package exceeds current expectations.

Across North America, a notable conversation is on reopening schools in September. In Canada there is a strong focus on determining safety protocols to enable a return to class for students of all ages. Decisions will be made on a regional basis, but the discussion is widespread. While a return to school is being advocated for in some circles, and would be considered a positive step towards economic recovery, unsurprisingly there remains a great deal of concern amongst many teachers, parents and students. We expect this to be a fluid situation, one that will likely demand flexibility from all involved for some time.

Globally, good news continued to roll in around vaccine development and procurement, with many countries, including Canada, taking steps to enter into agreements with pharmaceutical companies to secure vaccines once they become available. In Canada specifically, a Vaccine Task Force has been created to advise the government on multiple matters including how best to support vaccine research and development in our country, and to review and recommend viable vaccine candidates. At this juncture, the Canadian government has secured millions of doses of Covid-19 vaccine candidates for expected delivery in 2021 from two companies: Pfizer and Moderna.

Canadian GDP rebounded smartly in May, rising a better-than-forecasted 4.5% compared to April, led by gains in the manufacturing sector as well as retail trade and public sector industries. Contextually, however, we must remember that this rebound is off of the economically crippling months of March and April that were marked by large shutdowns. The May GDP number is still 15% below the pre-pandemic level it was at in February, suggesting that as a whole, there is a still a lot of ground to be recovered. Other May data that showed improvement included retail sales, wholesale trade, and home sales.

On the topic of home sales, we also caught a glimpse this week of the Canadian real estate market’s July figures. Sales surged in Canada’s two biggest real estate centres: Toronto and Vancouver. Low mortgage rates, and limited overall supply were cited as key drivers for the robust sales activity.

The peak-to-trough numbers for the current market decline and subsequent recovery are provided in the table below, as of today’s closing prices. In spite of today's mixed results, markets were up across the board for the week. All four market geographies we track are now showing single-digit decline percentages from peak to current levels.

All eyes were on the U.S. Federal Reserve this past week. And, it did not disappoint, at least with respect to the buzz generated within the investment community. The Fed, as it is often referred to, appears to be preparing for a shift in its approach...

It has been an uneventful few weeks, with volatility near the lows for the year. Government bond yields have remained in a tight range for the past few months, which stands in contrast to the larger swings witnessed earlier this year. Inflation concerns...

Weekly Letter: A Perspective on the 2021 Financial Markets

Overall, markets were unchanged or modestly higher over the past week. Some of the inflation-fueled concerns subsided in recent days, helping to revive the high growth parts of the market that have bared the brunt of the latest bouts of pressure. Canadian...