After an extended period of calm, market volatility has increased in recent days. Fears around the spread of a new coronavirus and the impact it may have on global activity and growth have put a dent into widespread optimism that the global economy was stabilizing, leading to a flight to safety as risk assets sold off. While the virus is a real threat and does appear to be spreading quickly, these health scares tend to be transitory. Though the natural inclination during periods of heightened fear is to sell on fear of what’s to come, history has shown that these periods of volatility tend to be short-lived.

News has quickly spread around the outbreak of a new coronavirus that began in the city of Wuhan, China. Infection rates have risen substantially over the last few days, and while the virus remains centralized in Wuhan and surrounding areas in China, more than 10 nations have now reported at least one confirmed case, transmitted by travelers who have spent time in the Wuhan area. There are now more than 30,000 Chinese citizens under observation, nearly 3,000 confirmed cases and 80 deaths. These figures are rising quickly – there are more than ten times as many cases as there were just a week ago, and some days have experienced an outright doubling in confirmed cases. That said, the incidence outside of Mainland China remains limited. Given the newness of this virus, facts around the transmission rate, incubation period, and ultimately the fatality rate remain to be seen. Early indications point to the following:

Fortunately, much has changed in recent years as it relates to public health policy and procedures, as well as how quickly and easily these viruses can be identified and tracked. Hospitals and medical professionals have improved their protocols for containing and treating infected individuals, narrowing the scope of transmission. Measures to contain the outbreak have already been witnessed in China, where coffee shops, movie theatres and theme parks have shuttered their doors for a period of time in order to reduce public gatherings. Travel restrictions have been implemented in an effort to further stem the contagion. Notably, in a direct effort to control the spread of the virus, China announced that it will be extending the Chinese New Year holiday period by a few additional days, delaying the return to work until February 3.

While we are likely to see the number of reported cases rise over the coming days, these critical measures, combined with rapid information sharing, early detection and improved isolation protocols, could prove mitigating factors in the spread of this outbreak.

Given the newness of this outbreak and its associated data, any estimate of the economic impact is highly speculative. So far the economic damage is likely negligible outside of China, and limited within China. That is likely to increase; the question remains to what degree.

Theoretically, the damage arrives in a variety of forms: fewer workers due to illness and on a precautionary basis; and fewer shoppers and travelers due to concerns about being infected in public spaces. During the SARS episode, Chinese GDP growth briefly swooned by 2% on an annual basis, while Hong Kong suffered a temporary outright decline in output. Within the developed world, Canada was disproportionately impacted; the economy actually shrank during the peak of the epidemic. In contrast, the U.S. economy was largely untouched as the country suffered fewer cases.

However, all of these economies managed to rebound briskly as soon as SARS was resolved, and none suffered any obvious lasting damage. We expect that this episode will likely follow a similar trajectory, with a palpable hit to China’s economy that proves to be short-lived, in part because China will likely deliver more stimulus, and in part because conditions should almost immediately normalize as soon as the disease abates. One complicating factor is the potential impediment to manufacturing production should migrant workers become reluctant to return to the big cities until the disease is under greater control. While we cannot speak with any confidence as to how long the Wuhan virus will remain problematic, these viral outbreaks have generally been resolved in a matter of months.

While initially quite calm, market volatility has increased over recent days. U.S. treasuries have rallied on the back of a broad sell-off in risk assets, while global equity markets and oil prices are markedly lower. The sell-off is being driven by concerns that the spread of this virus will weigh on global activity, impeding economic growth and interfering with consumer confidence, and ultimately the earnings growth outlook. That said, it’s important to acknowledge our starting point. The past year was exceptionally strong, as uncertainty lifted and concerns over slowing global growth eased. Prior to this sell-off, markets were arguably priced for a very healthy outcome. To some extent it’s not surprising to see an increase in volatility, particularly given the extended period of calm we’ve experienced. It’s possible that downward momentum may continue over the coming days should headlines around the spread of this virus worsen.

While the short-term outlook is murky, from a long-term perspective this sell-off could provide an interesting opportunity for investors to put cash to work. History shows that the long-term impact of these events is short-lived and markets tend to overreact before quickly bouncing back. Indeed, examining market moves prior to and following some of the more recent outbreaks shows that the market troughs within 20 days of the key outbreak date. Even that lag comes with its own issues as the SARS outbreak coincided with a weak U.S. economy that had many fearing a double dip recession, as well as the lead up to the Iraq war. Despite those concerns, markets largely shrugged off the global health scare as investors quickly recognized that they rarely have a large or lasting impact on the global economy.

U.S equity moves in the face of viral outbreaks 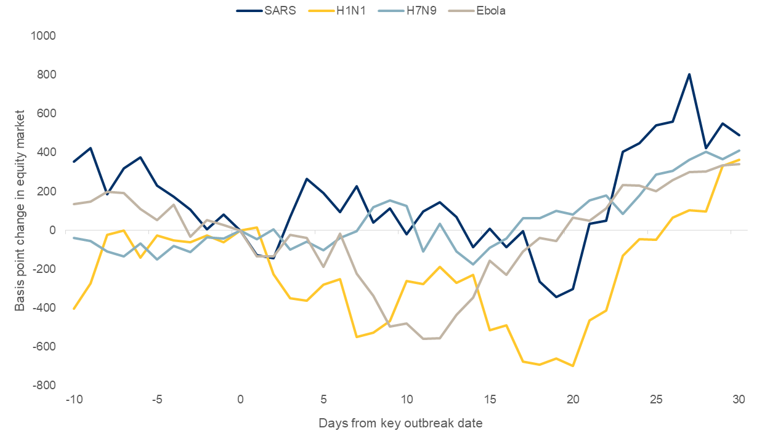 At this time, all indications suggest that the measures being taken to stem this outbreak should prove helpful in mitigating the global health risk. That said, it’s early days and headlines may continue to draw attention to these risks as more cases are announced. While markets have begun to react to these concerns, our base-case scenario is that this outbreak is contained and doesn’t have a large-scale impact on the global economy. We remain on alert for signs of an increase in the severity of this outbreak and will adjust our forecasts accordingly should conditions necessitate.

When market volatility increases, there is a tendency for even the most experienced investors to become overly focused on short-term movements. Often, this can lead to hasty decisions that interfere with the long-term objectives of your investment portfolio. The key to avoiding these knee-jerk reactions is for investors to focus on the financial plan they have in place. Day-to-day market fluctuations, particularly those driven by health scares, are likely to have little impact on long-term investment strategies. Maintaining perspective is key to remaining on track.

What does the outcome of the Canadian election mean for investors? RBC Global Asset Management provides an in-depth perspective on what the newly elected leadership might mean for Canadians. Specifically, they address some of the policy promises of the...