The outlook for the global economy improved significantly as vaccine production and distribution ramped up with real GDP expected to increase by 5½% in 2021.

The outlook for the global economy improved significantly as vaccine production and distribution ramped up with real GDP expected to increase by 5½% in 2021. This upgraded forecast reflects strong momentum heading into 2021 and expectations that monetary policy will stay extraordinarily accommodative and fiscal policy support will remain in place or, in some countries, increase. Optimism that economies will be able to sustainably reopen as virus spread eases remains subject to uncertainty given the growth in virus variants and logistical problems with vaccine distribution. That said, activity in January and February indicate that many economies have been able to manage through the second (and in some cases, third) wave of infections and lockdowns with far less disruption. To-date the pace of vaccinations in the UK and US have significantly outpaced Europe and Canada although the latter are poised to pick up the pace. 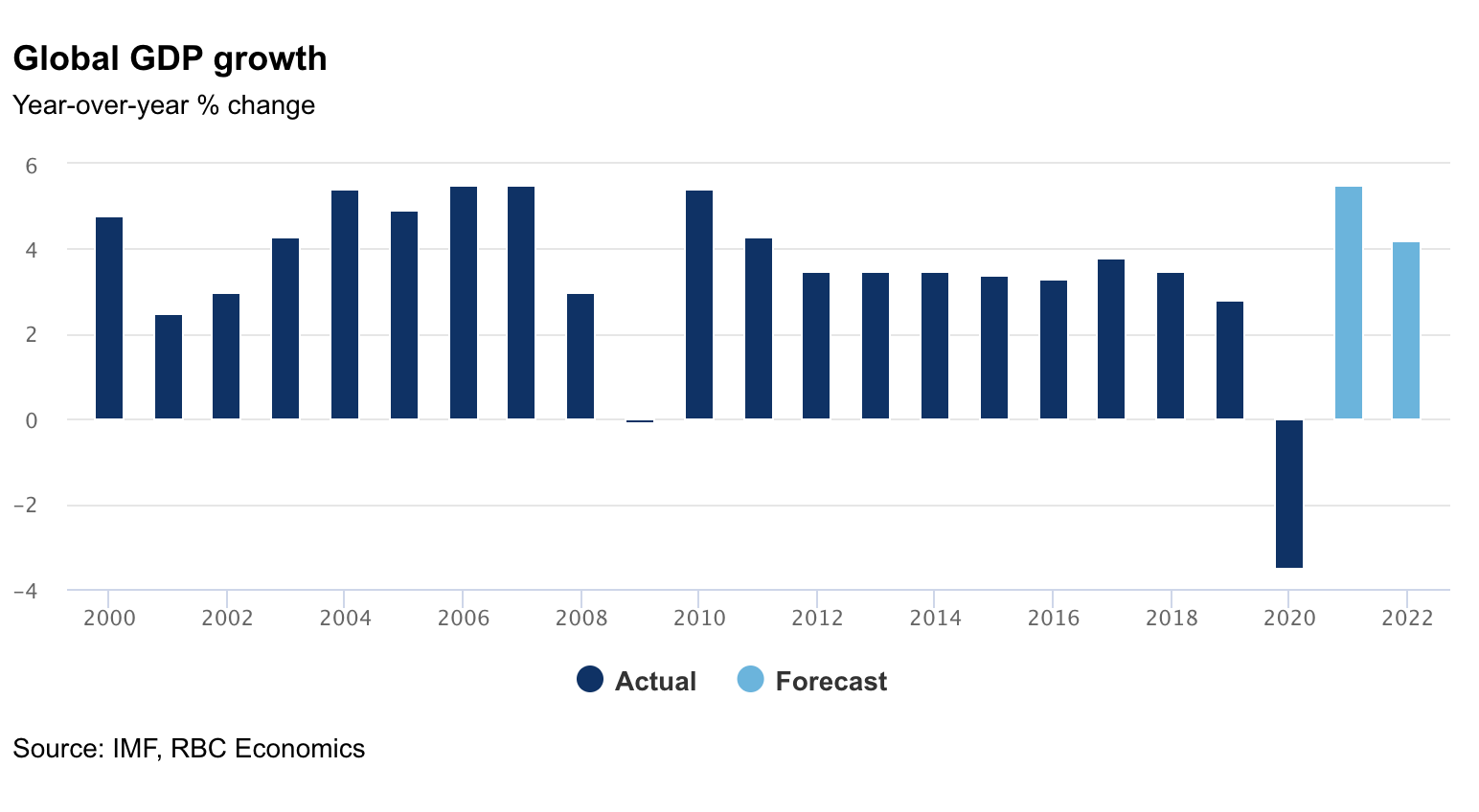 As vaccination rates rise, the unevenness of the recovery will start to diminish. To-date growth has been driven by the rapid improvement in global manufacturing and resilience in service-sector industries, like professional services, that are more easily performed remotely. High-contact industries like travel and hospitality have remained exceptionally weak. As economies reopen, household savings, which grew due to limited spending opportunities and high government transfers, will help to fuel a surge in services consumption. 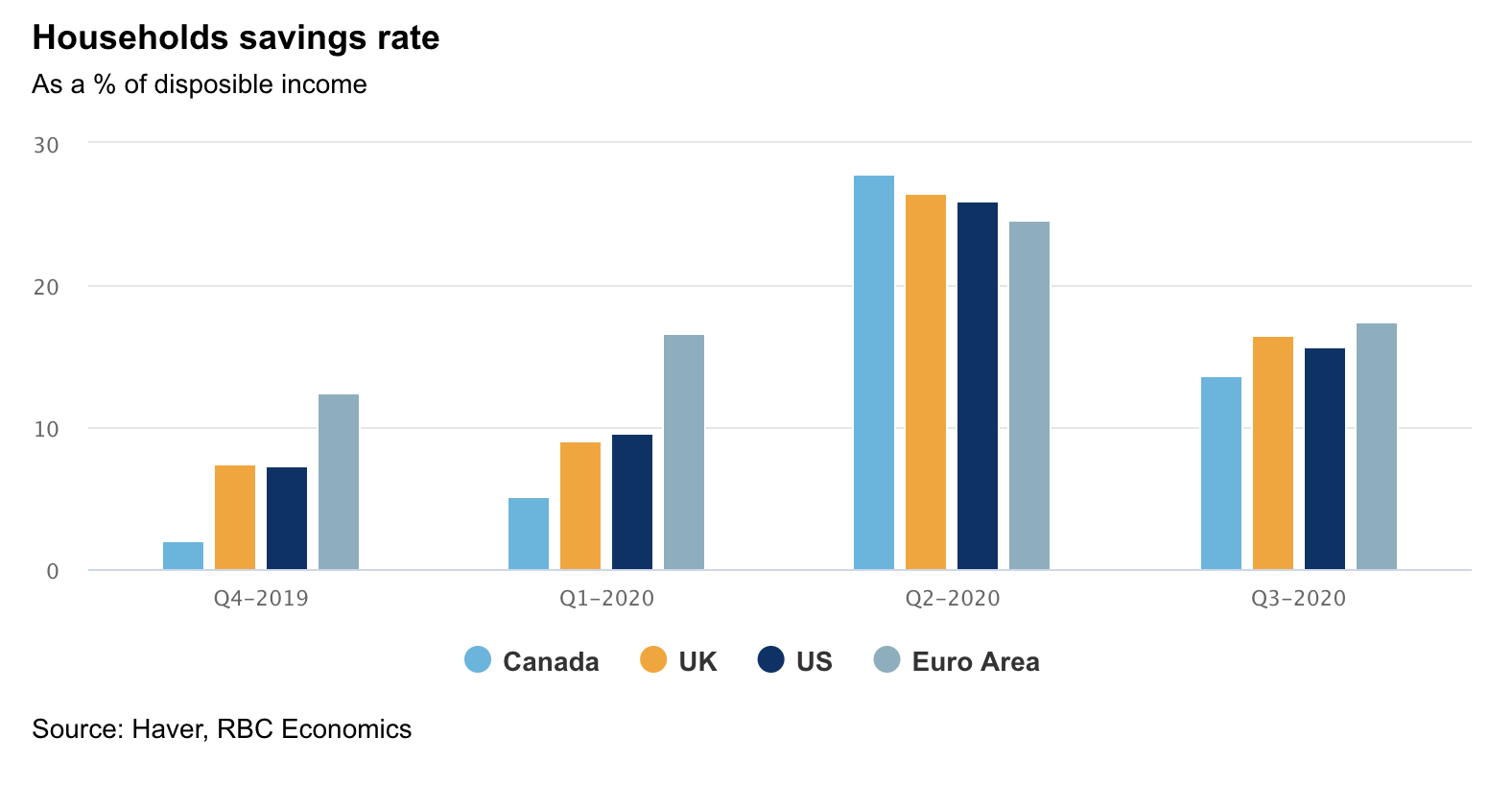 The prospect of stronger growth, rising commodity prices and the persistence of aggressive policy support have awakened concerns about inflation pressures building. A jump in inflation rates into the spring will largely reflect base-effects from very low energy prices a year ago, although an acceleration in household demand will also leave underlying price growth trends firming into next year. A significant break-out in price pressures of the kind that would force central banks to react quickly remains unlikely unless inflation expectations become unhinged.

The US economy emerged from 2020 on a strong footing having significantly recovered from the greater than 10% drop in output in the first half of the year. By year-end, GDP losses relative to pre-shock levels had been pared to 2.4% and early 2021 reports showed the economy’s momentum increased even before the pace of vaccinations accelerated. With 18% of the population having at least one dose of the vaccine by early March and the Biden Administration’s $1.9 trillion Covid relief package making its way through Congress, the US economy is forecast to have fully recovered its pandemic-related losses by mid-year. Our forecast for 2021 has been upgraded to 6.2% from 4.4% and we look for the economy to record another 3.3% gain in 2022. 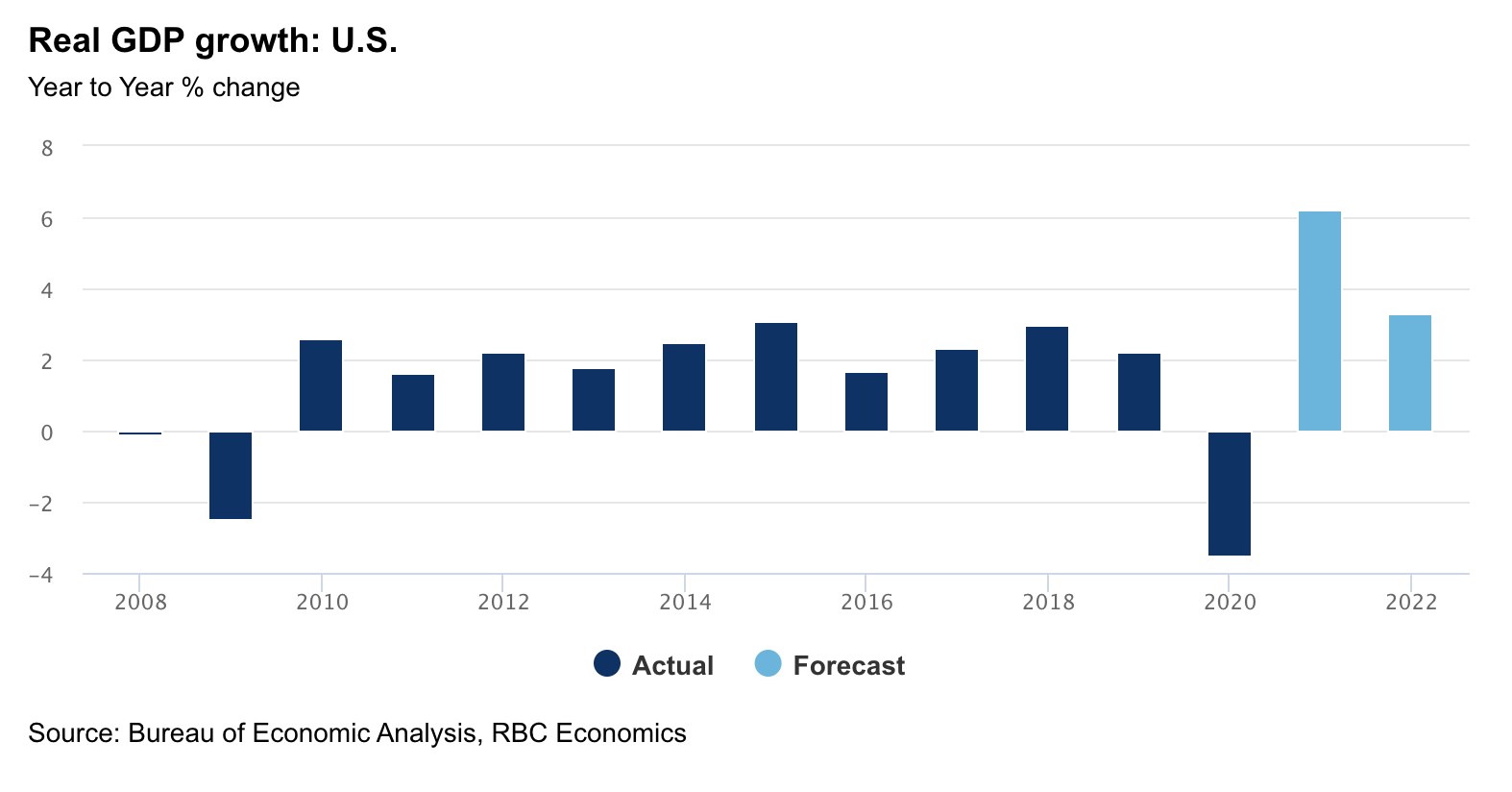 The labour market recovery continues with the unemployment rate falling to 6.2% in early 2021 as more than half of the workers who lost their jobs at the worst of the crisis returned to work. Job gains are expected to continue as the hard-hit services sectors recover although some structural changes that were accelerated during the pandemic will delay a return to full employment. US inflation conversely is expected to pop as base effects from falling prices last year combine with rising energy and other commodity prices push up the headline rate up. The Federal Reserve’s adoption of a flexible inflation targeting regime means that policymakers will tolerate inflation running above their 2% target for a period of time. And with labour conditions expected to take some time to fully recover, the Fed is likely to be in no hurry to boost the policy rate this year. A more persistent rise in the inflation rate could tip the scales in favour of a rate hike this year. However we expect policymakers will let the economy run hot to ensure that their goal of a broadly based and inclusive labour market recovery is achieved and will monitor closely the unemployment rate before making a move. This is likely to take until 2022 and we look for the Fed to raise the fed funds target by 25bps in the first quarter with another 25bps increase likely to follow in the third quarter. 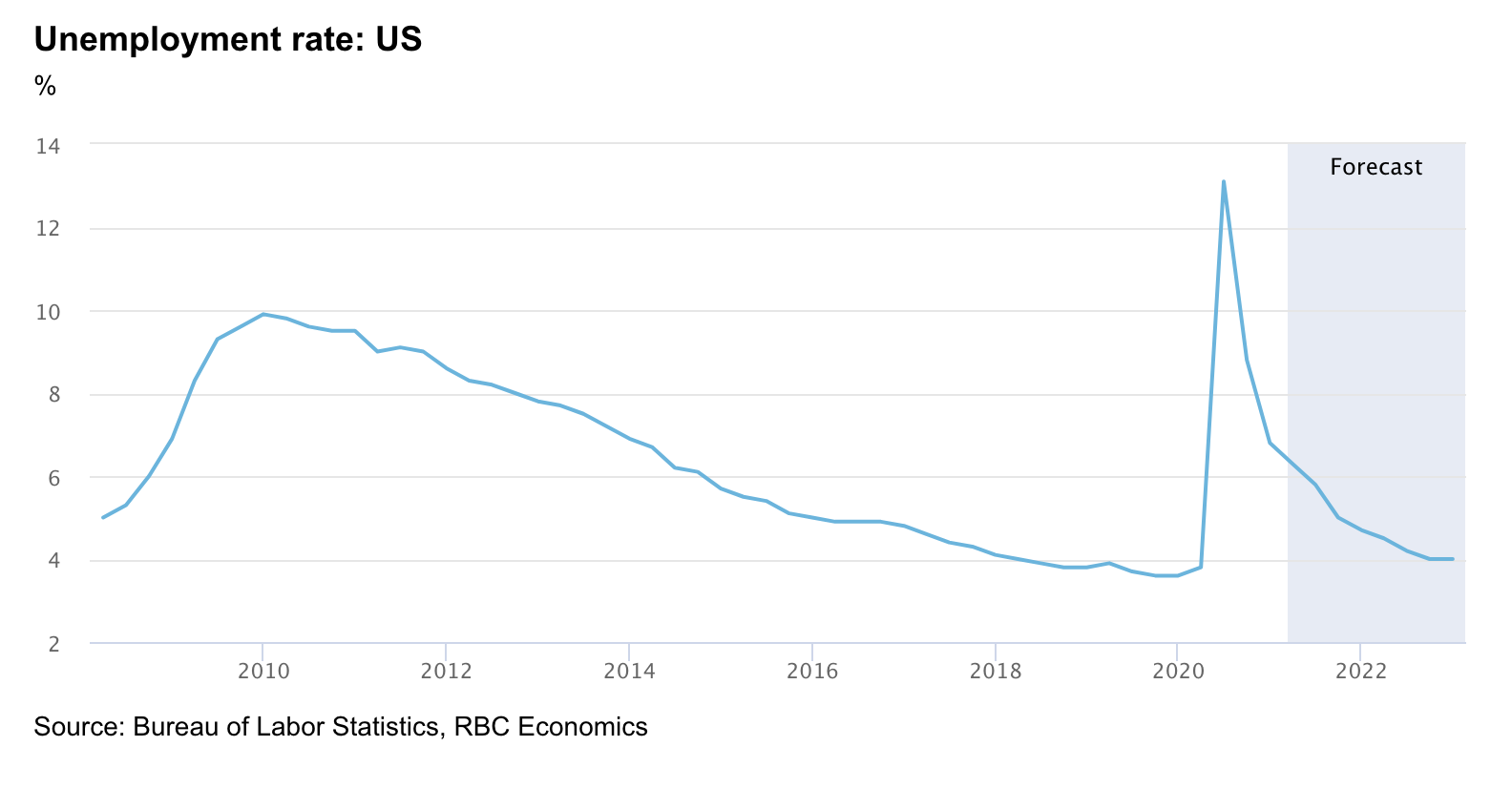 Canada’s economy shrank by 5.4% in 2020, marking the largest decline since the Great Depression. It was a year of record-breaking swings in activity with a collapse in the first half of the year followed by a double-digit gain in second half. Encouragingly the economy grew at a robust 9.6% annualized pace in the final three months of the year clipping the output lost due to the pandemic to 3.2%. The momentum continued in early 2021 even with containment measures in place, leading us to upgrade our annual growth projection to 6.3% for the year from 5.0% previously. Our forecast that the economy will power through the lockdowns of early 2021 and grow at a 4.5% rate in Q1 sets up for GDP to return to its pre-pandemic level by September. 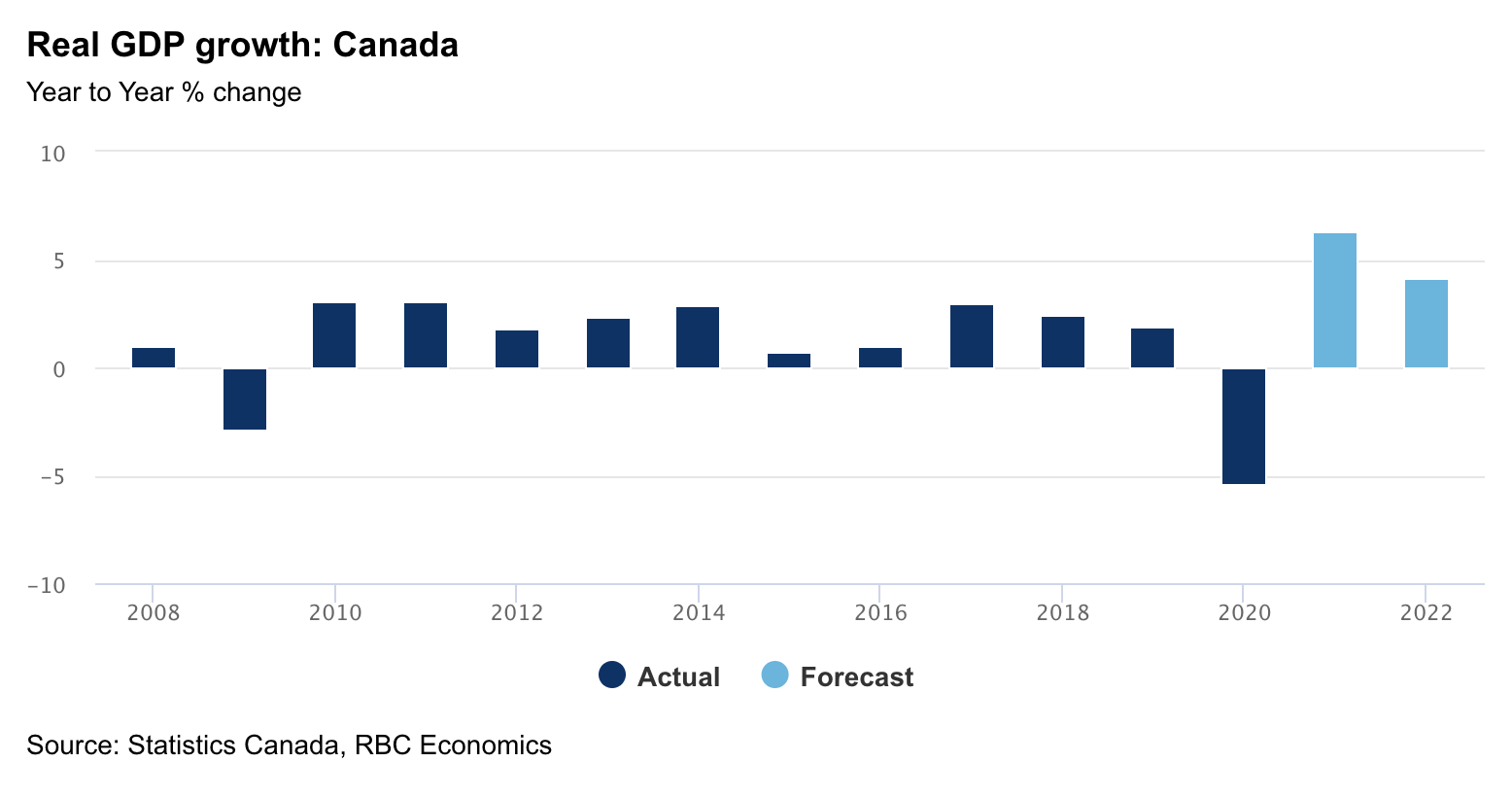 Canada’s labour market hit a snag as covid cases surged and parts of the economy went back into lockdown in late 2020. The unemployment rate which had fallen to 8.6% in November bounced to 9.4% with more than quarter of a million jobs cut in December and January. This paled when compared to the close to 3 million jobs lost last spring but interrupted a string of employment gains that saw 2.3 million workers get their jobs back from May through November. Less stringent lockdown measures and businesses adapting to changing conditions lessened the hit. We expect the labour market’s recovery will pick up again as some of the hardest-hit industries, like food and accommodation services, rehire workers. 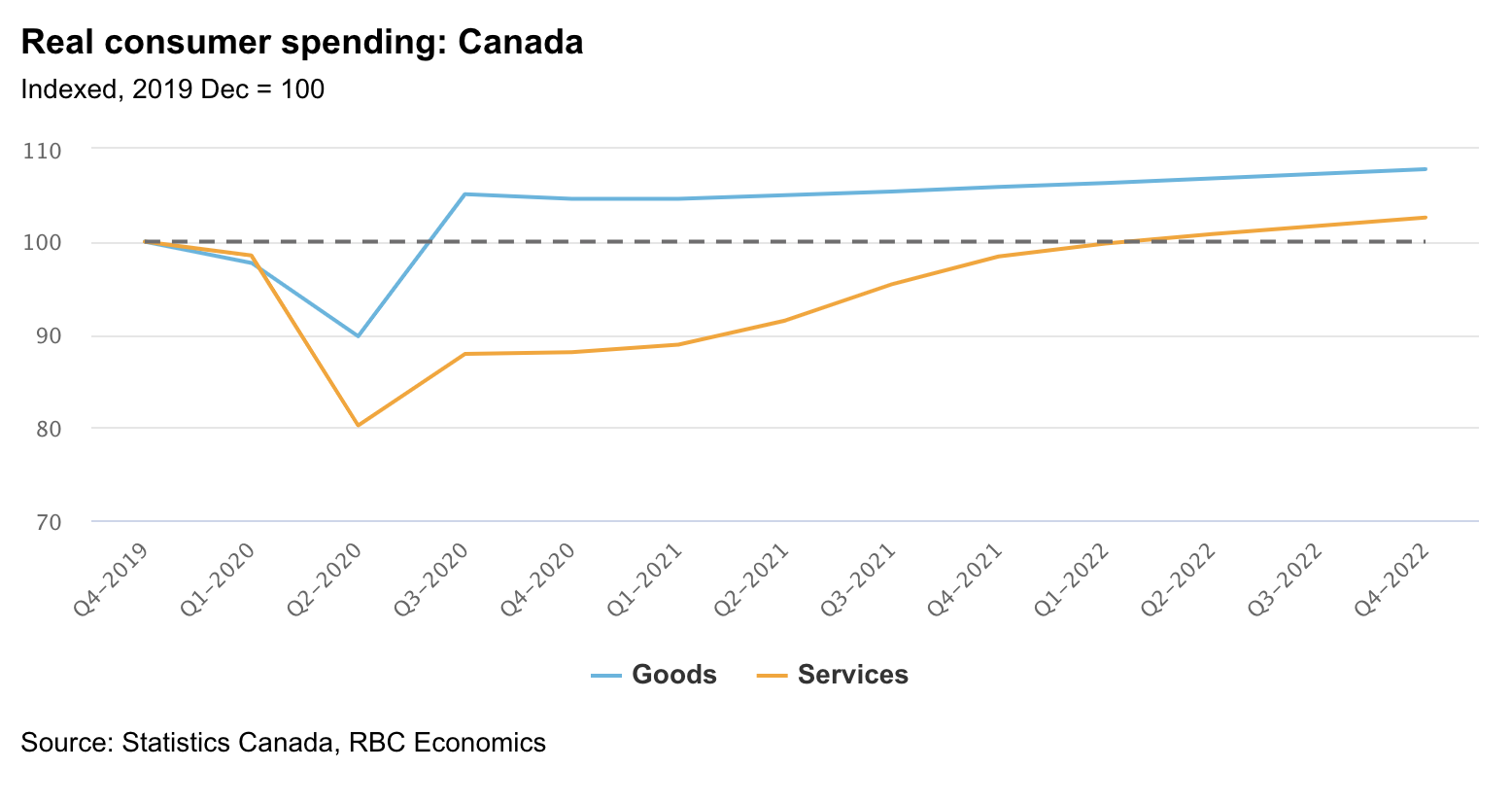 Government income supports and limited availability of services saw households stockpile savings in 2020 with close to $200 billion in excess savings sitting on their balance sheets. Rising asset values lifted households’ net worth to a record high providing even greater resources to consumers. Consumer spending on goods rebounded very quickly after a collapse last spring and continued through the second wave of virus spread and containment measures. The projected rise in vaccinations will allow restrictions to be eased and eventually eliminated clearing the path for spending on services to bounce back in the second half of 2021.

Government support for unemployed workers will continue in 2021 though demand will decline over the course of the year as the economy reopens and workers are rehired. There will be some workers who will be displaced by structural changes that occurred because of the pandemic meaning the unemployment rate will remain above its pre-crisis level. The federal government’s announcement that it plans to spend $70 to $100 billion over the next three years on programs like childcare and climate change could fuel even stronger growth in 2022.

The Bank of Canada provided a more optimistic economic forecast in January backed by their assumption that many of the recent restrictions will be eased in February and vaccine rollout will lead to broad immunity by the end of 2021. Their forecast of GDP growth of 4% this year and 4.8% in 2022 implies the economy won’t reach full capacity with 2% inflation on a sustained basis until 2023 and they plan to keep the overnight rate at 0.25% until these conditions are met. Our stronger growth forecast assumes that this will happen in the first half of 2022 teeing up for the bank to raise the policy rate in the third quarter. That said, the bank will be measured in removing policy stimulus meaning the following move isn’t likely until 2023.

Similar to the US, Canada’s inflation rate is projected to increase aggressively in the near term reflecting base-effects of falling prices a year ago and rising commodity prices. Price increases associated with supply chain bottlenecks and transportation disruptions aren’t expected to persist as the global economy gets back on track and commodity price are expected to stabilize. This sets up for the pickup in the inflation rate above 3% to be short-lived and for price increases to gravitate back to the BoC’s 2% target in 2022. Still, growth in household spending demand is set to outstrip supply by the end of this year with a more persistent underlying build in inflation pressures becoming more of a risk in 2022 and beyond. 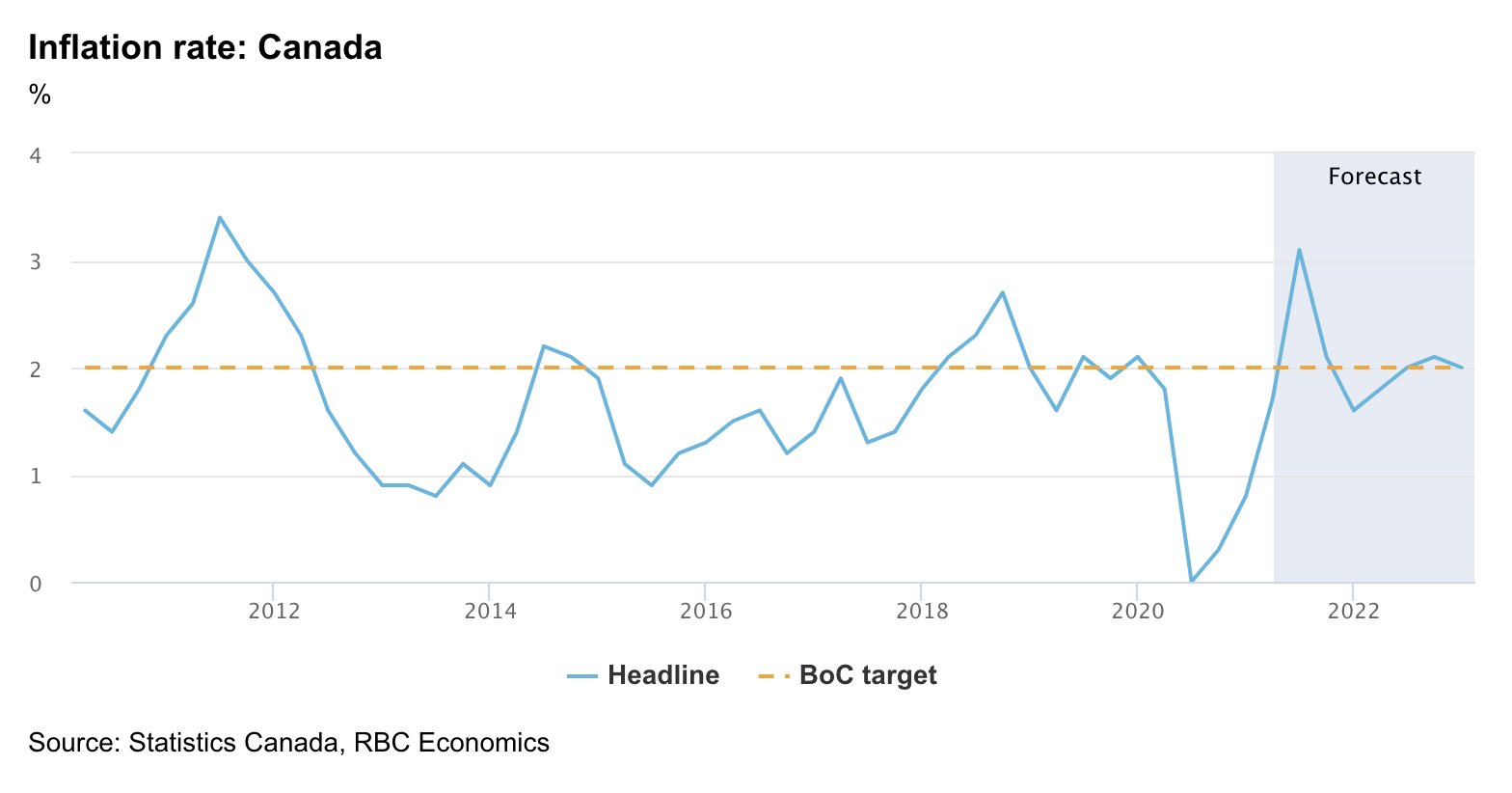 The firming in growth prospects boosted commodity prices which combined with a broad weakening in the US dollar saw Canada’s currency hit the highest level since early 2018. We expect higher commodity prices are here to stay and look for oil prices to average $61.50 this year, sharply higher than our previous forecast of $51.50. This will support Canada’s dollar however with the US Fed likely to raise rates before the BOC, the currency’s gains will likely be pared back modestly. Our forecast assumes the Canadian dollar will slip from over 79 US cents currently to 77 cents by the end of 2021.

Despite the pandemic stalling activity last spring, Canada’s housing market had its strongest year ever in 2020 as activity surged in the summer and fall. Homes sales accelerated further in early 2021 and we expect a new record to be hit as historically low interest rates, changing housing needs, high household savings and improving consumer confidence underpins demand. 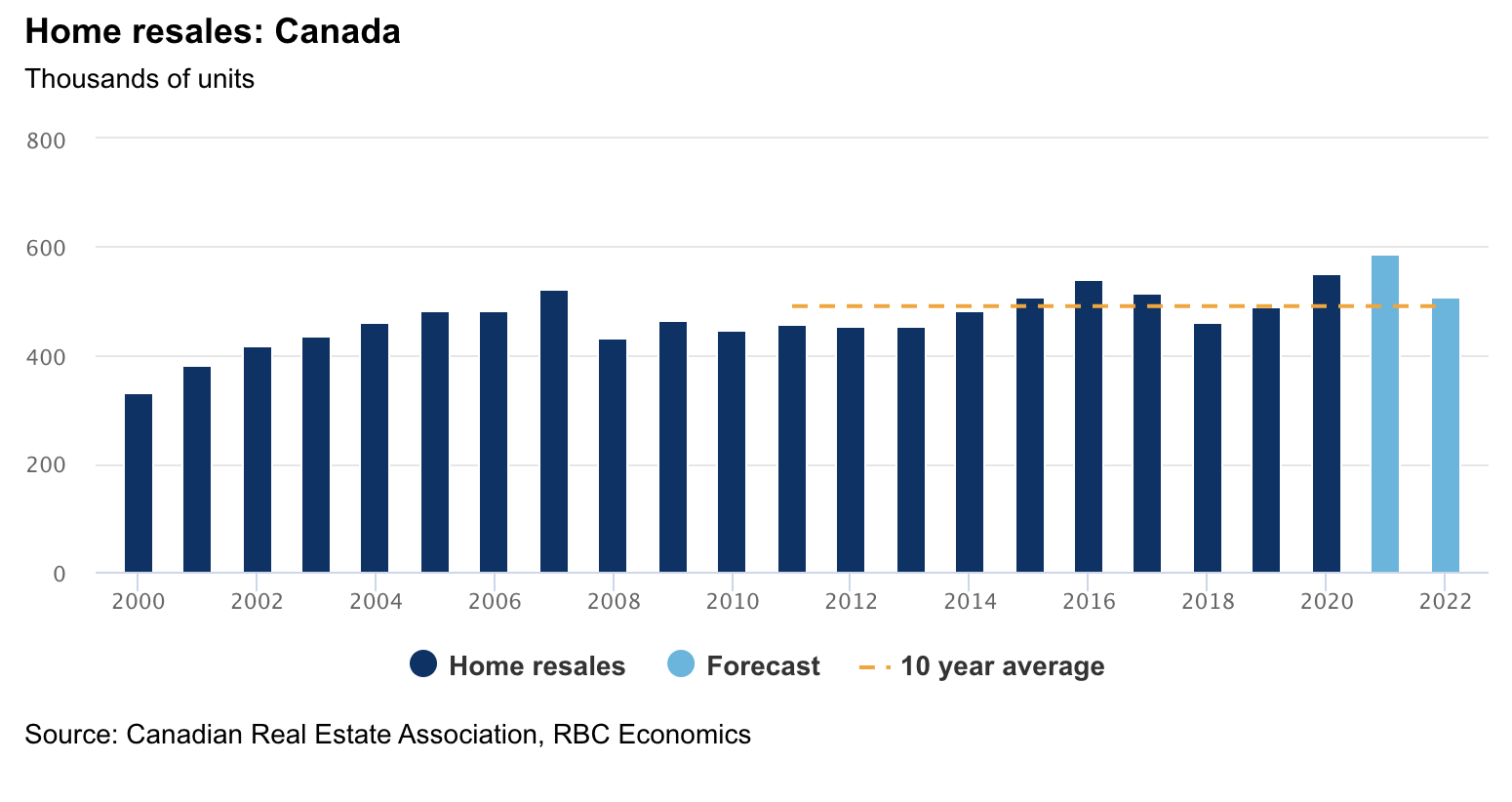 Home prices also recorded large gains in 2020 with upward pressure gaining momentum in January and February 2021 with signs of overheating emerging in some markets. The combination of strong demand and limited supply will see prices climb this year with the average increase projected to be 8.4%. That said, we expect cooling signs to emerge as the year wears on and come into fuller display in 2022 reflecting supply constraints, waning pandemic-induced market churn, modestly higher interest rates and deteriorating affordability.

Businesses ready to lean in

The prospect of increased vaccinations allowing for a wider and more sustained reopening of the economy has bolster business sentiment. A barometer of small business sentiment hit a post-pandemic high in February. A broader survey of capital spending intentions showed companies plan to increase investment by 7% this year and the BoC’s Q4 Business Outlook Survey flagged improved business confidence and investment plans. With some sectors, like manufacturing, already seeing capacity constraints, we expect investment activity to contribute to the economy’s recovery in 2021.

Almost half a million Canadian women who lost their jobs during the pandemic hadn’t returned to work as of January.